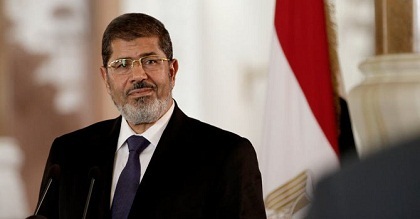 Egypt's President Mohammed Morsi on Saturday said a disputed new constitution guaranteed equality for all Egyptians, and downplayed the country's economic woes in an address before a newly empowered senate.

Egyptians voted in a December referendum in favor of the charter, which was rushed through by an Islamist-dominated council amid political turmoil and became the focus of the country's worst crisis since Morsi's election in June.

The senate has been invested with legislative powers under the new charter until a parliament is elected in two months' time.

"All are equal before the law, and in this constitution," he said of the charter, adding that there would be "freedom for all people, with no exceptions."

The constitution has been fiercely criticized by human rights activists and the secular-leaning opposition for failing to guarantee women's rights and potentially curtailing freedom of expression and freedom of worship.

"General indicators for the social and economic situation have shown some noticeable progress," Morsi said of the economy, despite concerns over a downturn.

A declining Egyptian pound and a $4.8 billion IMF loan stalled after weeks of often violent protests have put the country on edge, two years after the economy nosedived with an uprising that overthrew President Hosni Mubarak.

In a televised speech on Wednesday, Morsi welcomed the approval of an Islamist-backed charter in a referendum, despite fierce opposition protests, and pledged to turn his attention to the economy.

He also promised to reshuffle his cabinet. Two ministers, including an Islamist ally of Morsi, have so far resigned in disagreement with government policy.

Mass rallies that began in November after Morsi adopted extensive powers -- later repealed -- have now subsided, but the opposition this week called for further protests against the new constitution.

The opposition, led by the National Salvation Front coalition, sees the charter as a possible tool to introduce strict Islamic sharia law by weakening human rights generally, women's rights and the independence of the judiciary.

It also stressed that just one in three of Egypt's 52 million voters actually cast a ballot in the two-stage referendum on December 15 and 22.

The likelihood of prolonged "elevated" political conflict despite the adoption of the constitution prompted the ratings agency Standard and Poor's this week to knock Egypt's long-term credit rating down a peg to "B-."

The National Salvation Front is also now looking ahead and preparing for the upcoming parliamentary elections, after which the senate will be dissolved ahead of another round of elections.

Morsi's Muslim Brotherhood dominated the last parliament which was elected in late 2011 but later annulled by a top court stacked with his opponents.

Equality for all.
Just how many women does he have in his government? Just how many Copts?
"The constitution has been fiercely criticized by human rights activists and the secular-leaning opposition for failing to guarantee women's rights and potentially curtailing freedom of expression and freedom of worship."
How much equality is there in these fields?

Another one who believes that as soon as someone disagrees with him that person must be an Israeli. The last time I looked out of my window I'm afraid to tell you that I didn't see what you believe.
How you complain about the fact that there being two laws in Israel is very interesting, as actually there are three, Jewish law, Sharia law, and National law which is above the other two. (Just for your information, there is an Arab Judge who is a member of the Supreme Court of Israel). In case you don't know there is also a Sharia law and National law in nearly every single Arab state.
As for your other disgusting anti-semitic remarks, they don't even deserve a response from this Englishman.