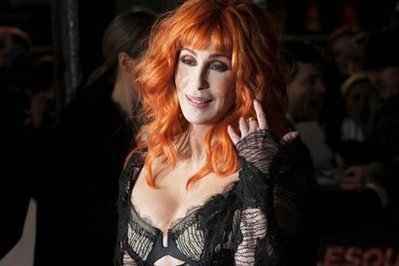 Music icon Cher, the rare celebrity to have earned both Oscar and Grammy glory, turns 65 this week with undiminished adoration from millions of fans around the world.

Before Madonna or Lady Gaga, there was Cher, a forerunner of the current crop of musical divas, with her fondness for head dresses, sequined gowns and a fearlessness of harnessing her sexuality as part of her carefully crafted public persona.

Throughout her career, Cher has sold more than 100 million records, but she said in a recent interview that her most recent hit -- last year's "You Haven't Seen the Last of Me" -- has particular poignancy at this moment in her career.

"That song, for me, had a lot of meaning," she told a California newspaper last year, saying that it reminded her that "I have to kind of move over."

"Not that I'm doing it gracefully, because you'd have to pull me over kicking and screaming," she said in her interview with the Fresno Bee.

Cher is a singular character on the American cultural landscape for her longevity and her ability to reinvent her career over a career spanning six decades.

Even the pop stars of the moment, not known generally to show deference to their musical elders, pay homage to Cher.

"How could you not learn from Cher with her work ethic and the way she commands attention when she walks into a room, but exudes such peaceful tranquility and love for everyone?" said singer Christina Aguilera.

Cher was born Cherilyn Sarkisian on May 20, 1946 to an Armenian truck driver who abandoned the family when she was just two-years-old, and a mother who cobbled together a living as a sometime actress model.

At barely 18, she teamed up with him to record "I Got You, Babe," the first of many massive hits.

The chart-topping 1965 tune became the duo's biggest single and their signature song, and was on Rolling Stone's magazine list of the 500 Greatest Songs of all time.

The couple married in 1969. Then came a daughter, Chastity, and their groundbreaking television variety act, "The Sonny and Cher Show," one of the most popular programs of the early 1970s.

Throughout early stardom, Cher was a style icon, equally as comfortable in bell bottom jeans and navel-baring cropped tops, she was in the floor-length form-fitting gowns that were staple attire on her show.

Her marriage to Sonny ended in 1974. A second marriage, to musician Greg Allman of the Allman Brothers Band, produced one son, Elijah Blue Allman. That union fell apart after barely two years.

But, the queen of reinvention, Cher launched her acting career around that time, earning lead role honors opposite Meryl Streep when they made "Silkwood" in 1983.

A few years later, she was awarded an Oscar for her starring role in the hit 1987 romantic comedy "Moonstruck" opposite Nicolas Cage.

Her on-again, off-again music career took off again at the end of the 1980s, when she had one of her biggest solo hits, "If I could Turn Back Time."

The tune might also have been describing her physical appearance, given her acknowledged penchant for plastic surgery, or her numerous farewell tours and comeback concerts.

Recently Cher has been in the news because of Chastity -- now known as Chaz -- who is now living as a trans-gendered man.

A new film, "Becoming Chaz" which debuted this year at the Sundance Film Festival, chronicles the medical and social transition of Chaz from female to male.

Over the years, in addition to her music and screen career, Cher has starred in a Las Vegas live show, with nearly 200 appearances.

Her latest musical hit was last year's "You Haven't Seen the Last of Me," heard in the film "Burlesque," which also marked her first big screen appearance in more than a decade -- the latest being the 1999 film "Tea with Mussolini".

In "Burlesque," she plays as a down-on-her-luck nightclub owner, opposite Aguilera, who waxed rhapsodic about her co-star.

"She's been there and done everything, before any of us," the singer said.