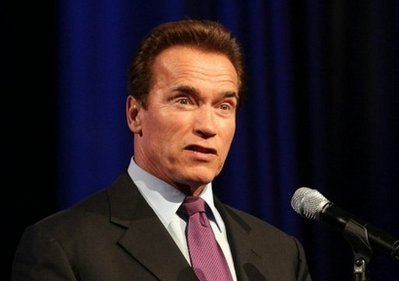 Arnold Schwarzenegger put all his movie projects on hold Thursday to deal with the family crisis sparked by revelations that he fathered a secret love child, a lawyer for the megastar said.

The former California governor told his agents that work on new projects including "The Terminator" franchise would stop "until further notice" as he grapples with a media storm and the breakup of his 25-year marriage.

"At the request of Arnold Schwarzenegger we asked Creative Artists Agency to inform all his motion picture projects currently underway or being negotiated to stop planning until further notice," said Arnie's lawyer Patrick Knapp.

Schwarzenegger "is focusing on personal matters and is not willing to commit to any production schedules or timelines," the lawyer said. This includes 'Cry Macho,' 'The Terminator' franchise and other projects under consideration.

Schwarzenegger, 63, announced his separation from Maria Shriver last week, and on Tuesday revealed that the split occurred after he told her about a love child he fathered over a decade ago, and kept secret from her.

Shriver, of the Kennedy political dynasty, has hired a top divorce lawyer, Laura Wasser, according to People magazine, although it quoted a source close to her as saying: "Maria hasn't decided yet if she wants to end her marriage."

Media reports have identified the other woman as Mildred Patricia Baena, who was a housekeeper for the power couple for two decades until Schwarzenegger stood down as governor in January.

Pictures of Baena and her son with Schwarzenegger -- who bears a striking resemblance to Arnie -- have circulated online since the actor admitted to the love child, and apologized to his family.

She was tracked down to her home in Bakersfield, a city 100 miles north of Los Angeles, but there was no sign of life in her single-story house where a media camp quickly developed.

In announcing their separation last week, Schwarzenegger and Shriver said they were taking time to "work on the future."

A few days later Schwarzenegger said they still loved each other, and were taking "one day at a time," hinting at possible reunion -- but Shriver's reaction to the love child news suggested she wasn't focused on reconciliation.

"This is a painful and heartbreaking time. As a mother my concern is for the children. I ask for compassion, respect and privacy as my children and I try to rebuild our lives and heal," said the 55-year-old.

It is not the first time the marriage has been strained by Schwarzenegger's relations with other women: it came under the spotlight notably during the 2003 election which he won, amid reports of his history of groping women.

Since January Schwarzenegger had started to return to show business, unveiling plans for a "Governator" comic book and animated TV show, and reportedly signing for a new film in the "Terminator" series.

It is unclear how long those plans will be put on hold.