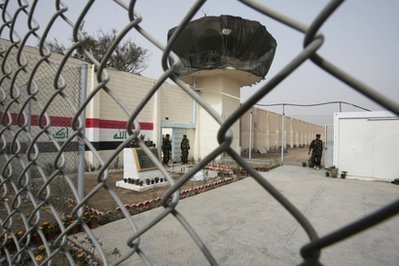 At least a dozen inmates, including several prisoners linked to al-Qaida who have been sentenced to death, escaped from a jail north of Baghdad early on Friday, security officials said.

Sources mooted the possibility of collusion on the part of prison guards in allowing the jailbreak, which occurred shortly after midnight in the town of Taji, 25 kilometers (15 miles) from the capital.

An interior ministry official said all 12 prisoners who escaped were Iraqis, but a military source put the number of escapees at 16.

"They escaped from Taji prison after they got hold of the guards' weapons," said the military officer, who spoke on condition of anonymity.

"It could be there was cooperation from the guards."

The officer said most of the escapees were linked to al-Qaida's front group the Islamic State of Iraq, while the interior ministry official said several had been sentenced to death.

Jailbreaks and prison unrest are relatively common in Iraq.

On September 27, more than 100 prisoners escaped from a jail in Tikrit, north of Baghdad, although several were killed or recaptured in subsequent weeks, officials said.