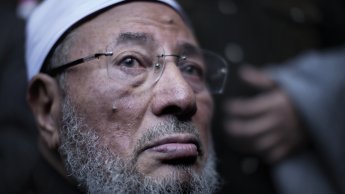 "Military intervention has dangerous consequences, whether in killing, destruction, displacement... and famine, which Mali is already suffering from," the Qatar-based International Union of Muslim Scholars said in a statement.

It criticized "France's haste in sparking war before having exhausted all means of a peaceful solution and national reconciliation".

French forces last week went into action in the vast country on the southern edge of the Sahara to help Malian troops contain hardline armed Islamist movements, who have occupied the north of Mali during the past 10 months.

The International Union of Muslim Scholars called in its statement for "dialogue and reconciliation as the only correct solution to resolve the problem in Mali," saying it is "ready to continue its efforts" to achieve this.

It also urged "the Organization of Islamic Cooperation and African countries to exert serious efforts to end the war and achieve a peaceful settlement."

Qaradawi, a controversial religious figure in the West, has millions of supporters, mainly from the Muslim Brotherhood.

In the statement, his union called for "reason and wisdom from armed groups" and urged them to "accept dialogue to reach a peaceful and just solution."

Qatari Prime Minister Sheikh Hamad bin Jassem al-Thani on Tuesday insisted that force would not solve the problem in Mali and urged dialogue.

This man makes sense and Islamic third world armed groups only pose a threat to the corruption around them.