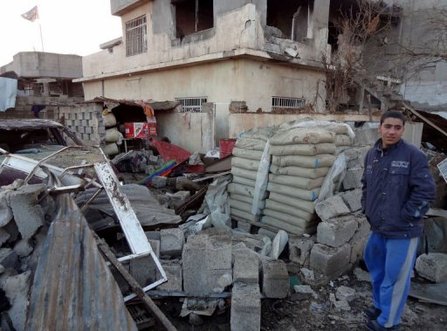 A suicide bomber made his way into a Shiite mosque north of Baghdad and blew himself up in the middle of a packed funeral on Wednesday, killing 42 people and leaving corpses scattered across the floor.

The attack, the deadliest in six months, is likely to heighten tensions as Iraq grapples with a political crisis and more than a month of protests in Sunni-majority areas that have hardened opposition to Shiite Prime Minister Nuri al-Maliki.

No group claimed responsibility, but Sunni militants often launch attacks in a bid to destabilize the government and push Iraq back towards the sectarian violence that blighted it from 2005 to 2008.

The bomber struck at the Sayid al-Shuhada mosque in Tuz Khurmatu, 175 kilometers (110 miles) north of Baghdad, and targeted the funeral of a relative of a politician who was shot dead a day earlier.

"Corpses are on the ground of the Husseiniyah (Shiite mosque)," said Shallal Abdul, mayor of Tuz Khurmatu. "The suicide bomber managed to enter and blow himself up in the middle of the mourners."

Niyazi Moamer Oghlu, secretary general of the provincial council of Salaheddin, which surrounds Tuz Khurmatu, put the toll from the attack at 42 dead and 75 wounded.

Among those hurt were officials and tribal leaders, including Ali Hashem Oghlu, the deputy chief of the Iraqi Turkman Front and a provincial councilor in Salaheddin.

The funeral had been for Oghlu's brother-in-law, who killed in Tuz on Tuesday.

Tuz Khurmatu lies in a tract of disputed territory that Kurdistan wants to incorporate into its autonomous three-province region against the wishes of the central government in Baghdad.

The row is regarded by diplomats and officials as the greatest long-term threat to Iraq's stability.

The death toll from Wednesday's blast was the highest from a single attack since a series of bombings north of Baghdad on July 23 killed 42 people.

Also on Wednesday, gunmen killed a school principal near the main northern city of Mosul and an anti-Qaida militiaman was shot dead near the predominantly Sunni town of Fallujah.

Wednesday's violence came after a wave of attacks on Tuesday killed 26 people and wounded dozens more.

That broke four days of relative calm following a spate of incidents claimed by al-Qaida's front group that killed at least 88 people on January 15-17, according to an AFP tally.

The militant group is widely seen as weaker than during the peak of Iraq's sectarian bloodshed, but is still capable of carrying out mass-casualty attacks on a regular basis.

The latest wave of violence means the overall death toll from bloodshed in Iraq this month has already surpassed that of any of the previous three months, according to an AFP tally based on reports from security and medical officials.

Attacks in Iraq are down from their peak in 2006-2007, but they are still common across the country.

The unrest comes amid a political crisis that has pitted Maliki against several of his erstwhile government partners, less than three months before provincial elections.