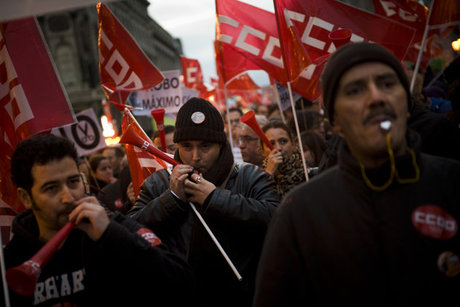 Spain announced Thursday that its unemployment rate surged to a modern-day record of 26 percent in the final quarter of 2012 as nearly six million people searched in vain for work in a biting recession.

The jobless rate climbed from a rate of 25.02 percent the previous quarter, reaching the highest level since Spain returned to democracy after the death in 1975 of General Francisco Franco.

The result shattered even the modest expectations of Prime Minister Mariano Rajoy's government, which had been forecasting an unemployment rate of 24.6 percent by the end of 2012.

An extra 187,300 people joined the jobless queue, which reached a total of 5.97 million people, a National Statistics Institute report showed. There were 8.33 million households in which every worker was unemployed, it said.

Spain, the fourth-biggest economy in the 17-nation single currency area, has embarked on a program of spending cuts and tax rises to save 150 billion euros ($194 billion) between 2012 and 2014, prompting mass street protests.

In recession since the end of 2011, the economy contracted by about 0.6 percent in the latest quarter, its steepest dive in more than three years, according to a separate report this week by the Bank of Spain.