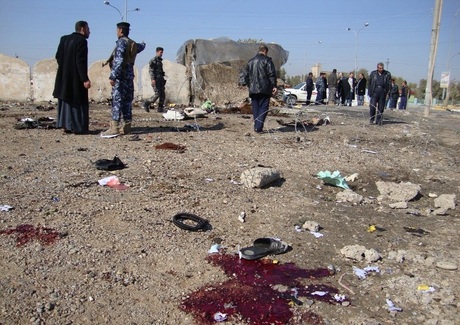 A suicide bomber who killed 42 people at a funeral in a Shiite mosque this week had escaped from prison in an al-Qaida jail break in September, a provincial politician claimed on Saturday.

The attacker, who struck on Wednesday in Tuz Khurmatu, north of Baghdad, also wounded 75 people in the deadliest single attack in Iraq since July 23.

Officials claimed he had entered the mosque by disguising himself as a cleric.

"The suicide bomber was one of the prisoners who escaped from Tikrit," said Ali Hashem Oghlu, a provincial councilor in Salaheddin, in which Tuz Khurmatu is located.

The funeral had been for Oghlu's brother-in-law.

The politician was referring to a jail break in Tikrit, capital of Salaheddin, after an assault by al-Qaida militants in which dozens escaped.

Oghlu named the attacker as Ahmed Ibrahim Hassan al-Hashmawi, which corresponds with the name of one of the escapees listed by the interior ministry.

No group claimed responsibility for the Tuz Khurmatu attack, but Sunni militants often launch attacks in a bid to destabilize the government and push Iraq back towards the sectarian violence that blighted it from 2005 to 2008.

Tuz Khurmatu lies in a tract of disputed territory that Kurdistan wants to incorporate into its autonomous three-province region against the wishes of the central government in Baghdad.

The row is regarded by diplomats and officials as the greatest long-term threat to Iraq's stability.