Geagea: Nakba Day Martyrs Had a Cause, But Were Exploited to Deviate Attention from Syria Unrest 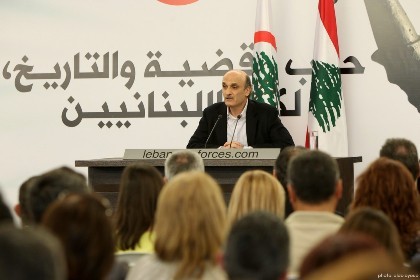 Lebanese Forces leader Samir Geagea on Wednesday said the caretaker cabinet “has a duty, amid what’s happening in the region, to take all measures necessary for the proper implementation of (U.N. Security Council) Resolution 1701, as we should not expose our borders, youths and Lebanon to danger.”

“We respect the martyrs who fell on our northern border while commemorating Nakba Day, because hadn’t they been sincere in defending their cause, they wouldn’t have been ready to die in that way,” Geagea added, calling on “political officials to take all measures necessary to avoid the recurrence of such an incident.”

But Geagea noted that “organizing such activities by a certain party, organization or group is aimed at deviating attention from the events happening in Syria and other Arab countries.”

Addressing the cabinet formation impasse, Geagea described the delay in forming a new government as a “major misdeed,” stressing that parliament should not commit “another misdeed” by performing cabinet’s role.

“The Constitution does not allow parliament to do that,” Geagea noted.

Commenting on calls for forming a technocrat cabinet, the LF leader said: “If the other camp is not capable of forming a political cabinet, let it form a cabinet that addresses people’s concerns.”

“Some don’t like the term ‘technocrat’, so let them brand it as they see fit,” Geagea went on to say.

As to the issue of the Syrians fleeing to Lebanon to escape unrest in their country, Geagea stressed that “it is unacceptable for any Lebanese official to smear and tarnish Lebanon’s image in the world and the struggle of its people throughout hundreds of years.”

Lebanon should honor its values of “freedom and the preservation of human rights,” said Geagea.

“There are several international treaties and agreements that address the manner in which any state should deal with any refugee, topped by the Geneva Conventions, and Lebanon as a U.N. member state should act according” to these agreements, Geagea noted.