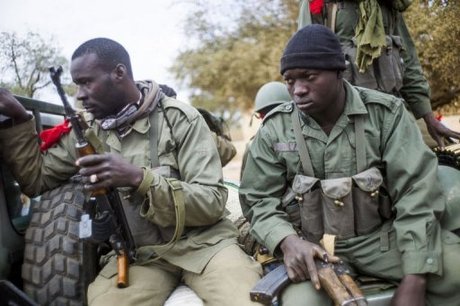 French and Malian troops seized control of the fabled city of Timbuktu on Monday, a bastion of radical Islamists occupying northern Mali since last April, military and government sources said.

"The Malian army and the French army are in complete control of the town of Timbuktu. Everything is under control," a colonel in the Malian army said on condition of anonymity.

Timbuktu Mayor Halley Ousmane, who is in the capital Bamako, confirmed that his town had "fallen into the hands of the French and Malians".

The French-led troops surrounded the ancient desert city by Monday morning, sending ground troops in to seize the airport while paratroopers swooped in to block Islamists from fleeing, with back-up from combat helicopters.

However before the armies arrived, the Islamists reportedly torched a building housing priceless ancient manuscripts. The extent of the damage to the centuries-old documents was not known.

The Ahmed Baba Centre was built with funds donated from South Africa and opened in 2009 to house the documents, seen as critical to Africa's history.

Shamil Jeppie of the Timbuktu Manuscripts Project at the University of Cape Town said he had no news from the ground but believed some of the most important documents may have been smuggled out or hidden in recent months.

"I've heard from reliable sources on the ground that the private libraries took good care of hiding or taking out their stuff," Jeppie said.

"The only redeeming thing I can say for the Ahmed Baba, the official state library, is that they managed to take out their hard drives with the digitized copies on. That was within the first month of the crisis."

He said the library was "a very important cultural treasure for Africa and for humanity".

"We have so precious little written sources for African history and here we have a rich heritage," he said, adding that some sources dated back to the 14th century.

"These are serious collections, substantial and serious bodies of material."

May France send them all, one by one, to hell. It's beautiful to see what happens when 21st century technology meets with 7th century ideology.

What a racist with a superiority ego and ignorance about Mali or Islam.

do you have evidence of this or you are just making statements à la libanaise.