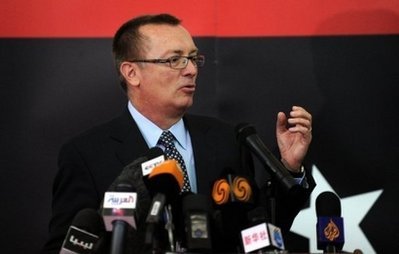 The U.S. is upping pressure on Lebanon to reduce its ties to Syria and is warning Lebanese officials that they risk being isolated, diplomats and officials told the Los Angeles Times.

A Western diplomat and Lebanese officials said that during his visit to Beirut last week, U.S. Assistant Secretary of State for Near Eastern Affairs Jeffrey Feltman bluntly warned Lebanese officials that the tide had turned against Syria’s Assad regime and urged them to distance themselves from it.

"There is no return back to the bad old days. Syria is going to change," a source with knowledge of the talks told the U.S. newspaper, characterizing Feltman’s message to Lebanon.

Also seeking to influence the cast of a new government in Beirut, Feltman warned that Lebanese leaders "risk being as isolated as Syria," which he characterized as "potentially the North Korea of the Middle East," said the source.

A Western diplomat said that the U.S. effort in Lebanon was one prong in a larger campaign to push the Arab world to stand against Syria's crackdown on protesters.

Wow, almost word for word from LA Times. Who wrote it first?

The source of the story is the LA Times ... it's written in the first line of this article.

What is the problem with you guys ? Most of the sentences are quotes !

If it is a crime by law for Lebanese to talk to Israeli zionist leaders, why isnit a crime for lebanese to talk to this fanatical American Zionist who only cares about Israel? The only country that will be isolated soon is Israel and the US support for Israel.

Zionist Jew Feltman is still in mourning about the loss of Mubarek. The tide is against Israel and the criminal declining half Chinese owned American empire. Any new government in Syria will be more anti-Israel than lousy baathists. If the Egyptians including muslim britherhood supports Iran and the lebanese resistance, I am sure any new government in Syria will do the same. Fools should be careful what they wish for.

Feltman must think he's Netanyahu, coming into town and telling everybody what to do.

No we shouldnt listen to this guy we only should listen to Ahamdinajad, Assad and Nassrallah because they have the best interests of Lebanon always in mind. look how nice they treat their citizens, we should love and cherish them without any questions because after god, its them in that particular order.
are you people for real?