Suleiman Praises Qabbani’s Keenness on the Safety of the State 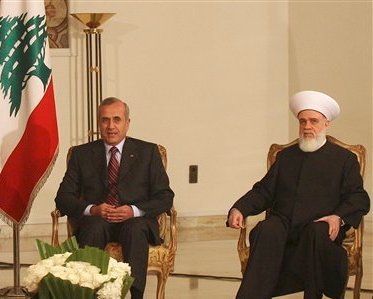 President Michel Suleiman telephoned Mufti Sheikh Mohammed Rashid Qabbani on Thursday lauding his “national role” and “keenness on the safety of the state mainly with regards to the preservation of the constitution and institutions.”

A statement carried by the state-run National News Agency said that Qabbani, in his turn, stressed to Suleiman that Dar al-Fatwa and Muslims in Lebanon “appreciate and respect” the president for “safeguarding the nation, its people, the state and institutions.”

Qabbani told Suleiman that his “united words” represent all the Lebanese and stressed that all statements holding grudges represent those who make them, in a veiled reference to Free Patriotic Movement leader Michel Aoun who, according to WikiLeaks cables, has called Sunnis terrorists.

The Mufti appreciates the “patience” exercised by the president and his “wisdom” in dealing with the different political parties and problems, the statement added.

The phone conversation was held a day after Qabbani slammed Aoun for his alleged remarks and amid efforts by Dar al-Fatwa to file a lawsuit against the FPM chief.