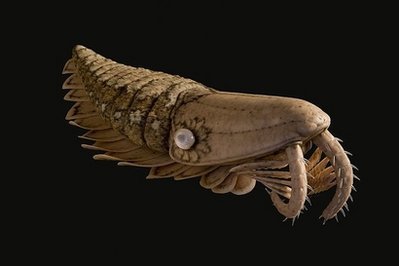 An ancient sea predator with a spined head and plated mouth grew to a much greater size and lived far longer than thought, according to a study Wednesday shedding light on one of the Earth's most intriguing evolutionary periods.

Scientists, in a paper published by the journal Nature, describe the splendid fossil of an animal called an anomalocaridid.

Anomalocaridids are thought to have been kings of the planet during the "Cambrian Explosion," some 540 to 500 million years ago, when biodiversity dramatically increased.

Until now, fossils of anomalocaridids have been in the range of 60 centimeters (two feet) or so in length.

But the new find, located in a treasure trove of fossils in Morocco, is a relative monster, as it measures a meter (3.25 feet) long.

Just as surprising, says the paper, is the discovery that this particular beast lived not in the Cambrian but in the Ordovician period which followed and which was also a time of species explosion.

It shows that these animals were a massive success, for they lived for 30 million years longer than previously realized.

"The anomalocaridids are one of the most iconic groups of Cambrian animals," said Derek Briggs, director of the Yale Peabody Museum of Natural History in New Haven, Connecticut.

"These giant invertebrate predators and scavengers have come to symbolize the unfamiliar morphologies displayed by organisms that branched off early from lineages leading to modern marine animals, and then went extinct.

"Now we know that they died out much more recently than we thought."