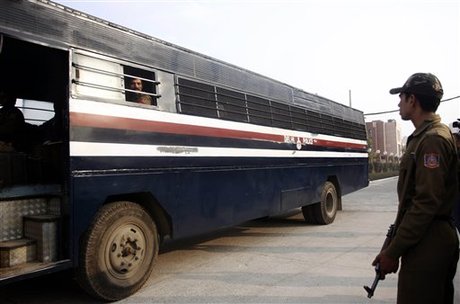 Five men pleaded not guilty after being formally indicted Saturday in a special court on 13 charges, including rape and murder, in the fatal gang rape of a woman in a New Delhi bus, a lawyer said.

The men signed statements in the fast-track court saying they were innocent, said one of the men's lawyers. The lawyer cannot be identified under a gag order imposed by the court.

The court will begin hearing the evidence of witnesses on Tuesday.

A sixth suspect, who is 17 years old, will be tried in a juvenile court. He could face a maximum sentence of three years in a reform facility if he is convicted as a juvenile. A conviction as an adult could have led to his execution.

Police say the victim and a male friend were attacked after boarding a bus Dec. 16 as they tried to return home after watching a movie. The six men, the only occupants of the private bus, beat the man with a metal bar, raped the woman and used the bar to inflict massive internal injuries to her, police say. The victims were dumped naked on the roadside, and the woman died from her injuries two weeks later in a Singapore hospital.

The brutal attack set off nationwide protests, sparking a debate about the treatment of women in India and highlighting the inability of law enforcement agencies to protect them.