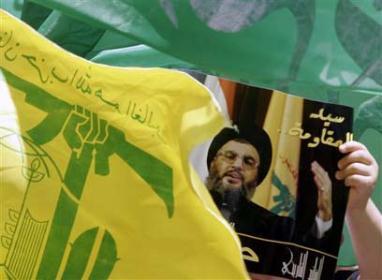 Hizbullah held a funeral on Saturday for Hussein Mohammed Nether in the southern town of Arabsalim, a member who died while “performing his Jihadi duty”, the party said in a released statement.

“The funeral procession marched from Ragheb Harb Hospital in Nabatieh towards Arabsalim where the martyr was buried,” it explained.

The procession was lead by party official Ali Daoun and the member of the central political bureau Sheikh Abdel Karim Obeid, in addition to prominent figures in Hizbullah.

The party has been accused of allegedly sending members to fight alongside the Syrian army in the neighboring country's conflict.

The pan-Arab daily Asharq al-Awsat reported in January that around 1,500 men are receiving salaries and being trained in the Bekaa camps to fight in Syria and defend Shiite villages and towns against the rebels.

Meanwhile, the Saudi al-Watan daily had reported that some 5,000 Hizbullah members have been fighting alongside regime troops in the restive suburbs of Damascus.

whoever dies fighting in Syria is worth nothing.

And, apparently, "cleaning up" our own Lebanese army. Such brave and righteous men, eh?

A Muslim killing another Muslim is not a jihadist. He's an assassin or a murderer. I'm pretty sure he's not surrounded by 72 virgins. LOL

In any case, the war in Syria is helping us in ridding Lebanon if scumbags and other dangerous people.

May he rest in peace. Another poor deluded brave man sacrificed as cannon fodder by his hiding cowardly leader on the altar of an Iranian relic's global Islamic revolution. I just hope he remembered to take his plastic key to heaven's gate with him, imagine the look on St Peter's face as he looks on the Farsi farce taking place before his eyes.

This is an idiot who sacrificed his life for nothing, for a war we have no business in. Hizbullah dosen't care how many lifes are sacrificed. Stalin once said: "a death is a tragedy; a thousand deaths is a statistic". For Hizbullah it's not even a statistic; it's a glorious achievement. Animals, nothing but animals. That's how they see people, that's how they see themselves, and they kill both.

May Allah swt judge him in the manner He sees fit wa Allahu 3alam. I can tell you one thing, I wouldn't want to be in that position. You can't be a shaheed if you re killing innocents, snipering from rooftops like cowards.

I only hope there are more of these Hezbollah cowards. We shouldn't let them be burried in Lebanon if they are killing Lebanons neighbors.

Hope we see more and more of these funerals--

I feel bad for the families of those killed, but the more funerals there are the more questions that will be asked about the exact nature of these 'jahadist duties'.

Hope we see more and more of these funerals--

I feel bad for the families of those killed, but the more funerals there are the more questions that will be asked about the exact nature of these 'jahadist duties'.

It is a shame that the Hizb has abandonned its principles and now fights to support a butcher who does not hesitate to bomb men, women and children lining up for bread in front of bakeries. This is an utter betrayal to all of the martyrs that fought to liberate south lebanon from israel.

@ z end Iran + Syria + Al Sayed will win it all no matter what!! bet on it!! Lebanon will be part of the great Persia/Jaafar, n any1 that doesnt like it can leave freely b4 too late. Long live Sayed....

Herald tribune has reports that there are between 4 to 6000 hizbullahi fighting in Syria. This really shows to the world the raison d'être of hizbullah. Not resistance to Israel but a tool for the hegemony of the Iranian Syrian axis. Only the aounist don't seem to understand this.

2 days after Israel hit in Syria? Was he driving a truck bringing weapons to Lebanon? I blame the Lebanese Authorities and Government for not making his death public or investigating how this Lebanese man died. We have a failure judiciary system not supported by our politicians. Everyone should be aware how this person died and if they are part of some foreign agenda then the Government should stop it or allow.

I hope he was killed in the airstrike. To be killed by Israelis will be little bit less painfull than being killed by fellow arabs while helping the butcher of Damascus.

....martyrs that fought to liberate south lebanon from israel.lol

he was martyred in arsal

You really are stupid.
Besides the fact that you don't know English.

Its funny how you guys sit here and say that Assad kills innocent people waiting in line for bread.. Maybe you guys didnt see the dirty pieces of KHARA.. the so called FSA garbage sunnis give the 8 yr old boy and sword and have him cut off the head on an innocent civilain old enough to be his father.. Sunni's are disgusting ppl who do not fear god. I Gaurantee this wont be posted becuase this news site is pure one sided.. Does not show the news its here to make Shia look bad..

"The slimy zionist propaganda machine"
Go and keep your filthy remarks in Canada.

Hope he goes straight to hell with the 4 Saints , the 5000 other pilgrims fighitng alongside Bashar, and all the other generous jihadists who lent themselves to the largest plan of political serial killings in History over the last 30 years!

Do I support the FSA? Not at all. It takes an incredible amount of stupidity to support the FSA that are comprised of Islamists that will be ten times worse than the Assad regime. But does me not supporting the FSA mean I support Assad? Of course not. Both dictators and Islamists must go.

Let history show that Hexbolla was supporting a brutal and merciless tyrant in the name of Shiasm and turned a blind eye when all dignity was removed.

Hoping the pathetic Muslims continue to eat each other as fast as possible. The Umma is in civil war and most all would prefer to be an Israeli Arab any day of the week.
Bye bye dirty Umma.

war transgressions are the worst kind of terror...

Funny we here no voice of m8 supporters.