Study Shows Moon May Have More Water Than Believed 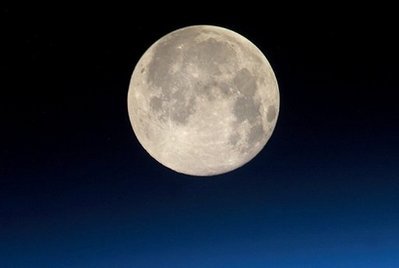 The moon may have a lot more water than imagined, perhaps as much as on Earth in some parts, a study said Thursday, in a discovery that has cast doubt on long-held theories about how it was formed.

The moon was long thought to be a dusty, dry place until a few years ago when frozen water was discovered there for the first time.

Scientists studied a sample of the "orange glass soil," formed during explosive eruptions on the moon 3.7 billion years ago and scooped up by American astronauts during the 1972 Apollo 17 mission, the last to visit the moon.

Unlike the majority of volcanic deposits, these are enshrouded in crystal cases that keep in water during eruption rather than allow it to escape.

"These samples provide the best window we have to the amount of water in the interior of the moon," said co-author James Van Orman, professor of geological sciences at Case Western.

"The interior seems to be pretty similar to the interior of the Earth, from what we know about water abundance."

The findings are in the May 26 edition of Science Express.

The same team published a paper in Nature in 2008, describing the first evidence for the presence of water in volcanic glasses returned by the Apollo missions.

"The bottom line is that in 2008, we said the primitive water content in the lunar magmas should be similar to the water content in lavas coming from the Earth's depleted upper mantle," said co-author Alberto Saal.

"Now, we have proven that is indeed the case."

While the findings corroborate a long-held theory that the moon and Earth have common origins, they also cast doubt on the notion that the moon may have formed after a chunk of the Earth was dislodged, losing much of its moisture in the high-temperature process.

Under this "giant impact" theory dating back to the 1970s, the moon was formed after our planet collided with a space rock or planet some 4.5 billion years ago.

"This new research shows that aspects of this theory must be reevaluated," the study said.

The NASA-funded findings also raise questions about theories that ice found in craters at the lunar poles may have resulted from meteor impacts, suggesting some of it may have come from the eruption of lunar magmas.

NASA announced in 2009 that two spacecraft sent crashing into the lunar surface had discovered frozen water on the moon for the first time, a dramatic revelation it hailed as a giant leap forward in space exploration.