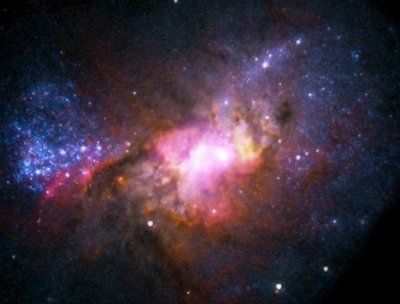 A 22-year-old Australian university student has solved a problem which has puzzled astrophysicists for decades, discovering part of the so-called "missing mass" of the universe during her summer break.

Undergraduate Amelia Fraser-McKelvie made the breakthrough during a holiday internship with a team at Monash University's School of Physics, locating the mystery material within vast structures called "filaments of galaxies".

Monash astrophysicist Dr Kevin Pimbblet explained that scientists had previously detected matter that was present in the early history of the universe but that could not now be located.

"There is missing mass, ordinary mass not dark mass ... It's missing to the present day," Pimbblet told Agence France Presse.

Fraser-McKelvie, an aerospace engineering and science student, was able to confirm after a targeted X-ray search for the mystery mass that it had moved to the "filaments of galaxies", which stretch across enormous expanses of space.

Pimbblet's earlier work had suggested the filaments as a possible location for the "missing" matter, thought to be low in density but high in temperature.

Pimbblet said astrophysicists had known about the "missing" mass for the past two decades, but the technology needed to pinpoint its location had only become available in recent years.

He said the discovery could drive the construction of new telescopes designed to specifically study the mass.

Pimbblet admitted the discovery was primarily academic, but he said previous physics research had led to the development of diverse other technologies.

"Whenever I speak to people who have influence, politicians and so on, they sometimes ask me 'Why should I invest in physics pure research?'. And I sometimes say to them: 'Do you use a mobile phone? Some of that technology came about by black hole research'.

"The pure research has knock-on effects to the whole society which are sometimes difficult to anticipate."