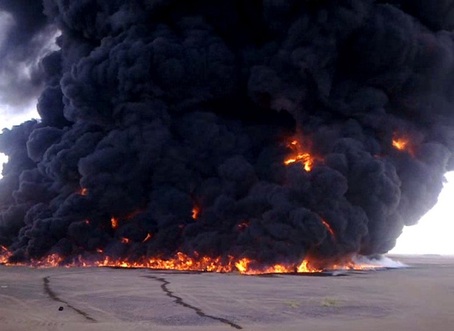 Gunmen in Yemen on Friday blew up a key oil pipeline that repeatedly comes under attack in the country's eastern Marib province, an al-Qaida stronghold, a security official and witnesses told Agence France Presse.

"Subversive elements in Wadi Abida (around 12 kilometers, seven miles from Marib) blew up" the 320-kilometer (200-mile) pipeline that carries oil from the Safer oilfields in Marib to an export terminal on the Red Sea, the official said.

Witnesses said that flames erupted from the pipeline, that carries around 180,000 barrels per day, following the explosion early on Friday.

Later, the army fired artillery at al-Haween in Wadi Abida where the attack took place, tribal sources there told AFP, as warplanes overflew the area.

No casualties have yet been reported.

Attacks on oil and gas pipelines by al-Qaida or by tribesmen seeking to win concessions from the central government are common in Yemen, an impoverished country that produces about 300,000 barrels of oil a day, mostly for export.

In December, the army launched an offensive against tribesmen suspected of repeatedly sabotaging the pipeline, sparking clashes which left 17 people dead.

According to official figures, lost production because of pipeline attacks in the east cost the government more than $1 billion in 2012, while oil exports fell by 4.5 percent.

In July, Petroleum and Minerals Minister Hisham Abdullah said Yemen had lost more than $4 billion (3.1 billion euros) in revenues since February 2011 because of such attacks.