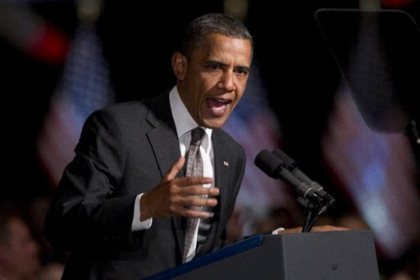 "If the sequester is allowed to go forward, thousands of Americans who work in fields like national security, education or clean energy are likely to be laid off," Obama said in his weekly radio and Internet address.

"All our economic progress could be put at risk," he added.

The cuts, which are due to take effect on March 1, would also affect U.S. military readiness, said the president.

"As our military leaders have made clear, changes like this affect our ability to respond to threats in an unstable part of the world," Obama pointed out.

The sequester was agreed by the president and Congress in 2011 to be so punishing that it would force Washington's warring political factions to forge an agreement on a way to cut the U.S. budget deficit.

But amid partisan gridlock, no agreement on cutting the deficit has been reached and cuts due in March will slash defense spending by $55 billion and non-defense discretionary spending by $27 billion this year.

On Friday, the White House issued a doom-laden survey of the impact of sequestration.

It said 10,000 teacher jobs were at risk, food inspections could stop, 373,000 mental health patients would lose treatment and prosecutors could be furloughed.

The FBI would have 1,000 fewer officers, small business loans would be cut by $540 million, and around 600,000 women and children could lose government-funded emergency nutrition, according to the White House.

"The good news is, there's another option," Obama said.

He reminded his audience that two months ago, the White House and Congress faced a similar prospect of deep cuts and tax hikes, known as the "fiscal cliff".

On that occasion, said the president, Democrats and Republicans managed to come together and make "responsible cuts and manageable changes to our tax code" to pull back from the brink.

"This time, Congress should pass a similar set of balanced cuts and close more tax loopholes until they can find a way to replace the sequester with a smarter, longer-term solution," Obama said.