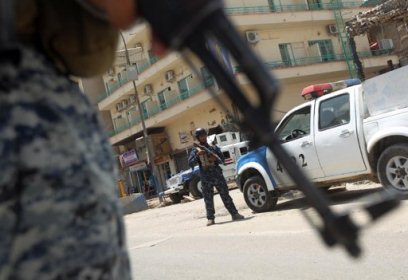 A bomb exploded on the roof of an Iraqi satellite channel's offices a day after the broadcaster aired a caller's criticism of a revered Kurdish leader, an official said on Sunday.

The explosion in the Kurdish city of Sulaimaniyah came as Human Rights Watch (HRW) criticized the autonomous Iraqi region for infringing on free speech by wrongly detaining journalists, activists and opposition figures for insulting public figures.

On Friday evening, the Nalia television station briefly aired a caller's criticism of Mullah Mustafa Barzani, a Kurdish nationalist leader and the father of Kurdistan's current president, during its "Free Microphone" program before cutting off the caller.

On Saturday, 300 supporters of Barzani's Kurdistan Democratic Party (KDP) tried to storm the broadcaster's offices but were turned away by riot police, an Agence France Presse journalist said.

Later that day, a bomb went off on the roof of Nalia's offices, a security official said. It was unclear who was behind the attack.

Abdulwahab Ali, the KDP's chief in Sulaimaniyah, said the party had not orchestrated the demonstration.

Nalia's offices were again attacked in February 2011 by masked gunmen who wounded a security guard and fired their weapons at the broadcaster's equipment.

On Sunday, New York-based HRW issued a statement criticizing Kurdish authorities for arresting opponents and journalists under legislation that has not been approved by the region's parliament.

"Instead of ensuring the justice system investigates high-level corruption, the Kurdistan regional government is ignoring its own laws to protect free speech and assembly, and using 'laws' that are not in force to silence dissent."

"Sadly, the Kurdistan regional government today looks less and less like the open and thriving democracy it paints itself to be."

The watchdog said that in 2012, regional security forces reportedly arrested at least 50 journalists, opponents and activists, prosecuting seven of them for insulting public figures.