Assad Says Syria Will not Submit to 'Plots' 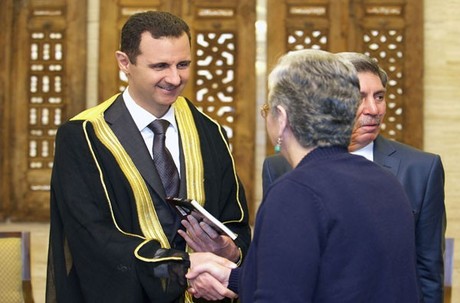 Syrian President Bashar Assad on Monday stressed that his regime, battered by nearly two years of revolt, will not submit to pressure or "plots" against it, reported state news agency SANA.

"Syria will remain the beating heart of the Arab world and will not give up its principles despite the intensifying pressure and diversifying plots not only targeting Syria, but all Arabs," Assad said at a meeting with a Jordanian delegation in Damascus.

The statement came after Syrian opposition chief Ahmed Moaz al-Khatib said he had received "no clear response" from Damascus over his offer of dialogue.

Khatib said in late January he was prepared to hold direct talks with regime representatives who did not have "blood on their hands," and so long as the discussions addressed replacing Assad.

The Assad regime had said it was open to talks but without pre-conditions.

The Syrian uprising began with mass peaceful protests in March 2011 and steadily grew into an armed insurgency amid continued state crackdowns.

Air raids, shelling attacks and fighting has left over 60,000 people dead since then according to the UN, the vast majority in the second year of the conflict.

Hopefully after all this said and done and Assad is hanged. Whomever takes over realizes the price war has cost both countries they actually start acting like truly sister countries. Not one country murdering the other and attending their funeral (sounds much better in arabic).

lebanon first, Hopefully after all this is over and Assad in hanged whoever takes over will also be hanged ,etc.,etc.,......,ad nauseum

Delusional just like his partners in crime. HA, Iran and Assad will all FALL! Not if.....just a matter of when.

Yallah Farsi aka fagblower go sell your garbage elsewhere. Where would your boys be if it weren't for Satan stuffing them with weapons? Hint: In line at Su Kleen looking for work. Imbecile and to think he knows how to navigate a PC.

FARSI Motoromouth...shouldn't you be on the front line with HizbShaitan guarding our borders from Israel? Where's your alliance to Gods Party? Or are you all talk and no action? Stop wasting your time here trying to recruit people to follow your barbaric ideologies! We are civilized people here who don't have time for your backward assed ways!

Mentally sick people fail to link their analysis of events with history. It is known by statistics that the Arabs do not read much and when they read they do not take lessons from history. One Moslem Egyptian of a very high position told me that someone from the Brotherhood said to him, "his distant Moslem is closer brother to him than his Coptic next door neighbour". Reading their comments on your paper confirms this direction of mentality

Hakka badri out of his Farsi rear.....again!

He looks like he just graduated university with that robe on, the rebels could only dreaming of looking so high statured.

You've got that RIGHT! Frozen in time and still wave their clubs like cavemen. There's no room for hatred/violence/religious-fanatics anymore...move on! Bunch of idiots!

"and every person with common sense knew and warned that unless assad steps down immediately, then the situation will turn into civil war and atrocities will begin to occur at the hand of the rebels, because once the killing starts, no one can stop it! "

totally true despite the propaganda from the fiercest defender of the baath regime (seems he is nostalgic of the syrian days in lebanon!) aka mowaten...

people were shot like rabbits for months and there was no islmaic fundamentalists at the time. but bashar let the situation rot knowing it would come to this and those groups took advantage of the chaos like in any unstable country!
reading M8ers and their pro syrian propaganda make me laugh! in a while they ll tell us that bashar is a democrat and always did good to lebanon...

yes M8ers quicly forgot that there are hundreds of lebanese in assad s jails kidnapped and that we don t know the fate! they quickly forgot the massacres they did in lebanon , the villages they wiped out and still they are defending this regime instead of wishing its disappearance for all the evil they did to lebanese!!

they just suffer from the stockholm syndrom....

didn t you ask yourself why in libya thousands gather in meetings for kaddhafi and once he was caught no one cried him?

simple: people under dictatorships are afraid to talk and oppose the gvt... just like many shias are afraid of hezbis and support them not to have any troubles.

supporting the baath regime because you are afraid of islamists just show how efficient M8 and syrian propaganda is on you...
get rid of this murderous regime first that harmed lebanon more than israel ever did then you may deal with islamists if ever they take over the power.
oh! by the way: funny how israel is more afraid of those islamists than from the syrian regime...it proves that the assad serve israel interests.

"is still supported by a significant portion of the population"

how do you know that? from elmanar? sana? a serious poll?

staline was adored by his people, all dictators are adored by their people: easy: just scare them and oblige them to love you! ask hezbis, they learned this lesson well too!

All I see is "sect A hates Sect B" or "Sect B is stupid" or "Sect C hates Sect A". All of you are idiots. That's why Lebanon sucks. Thanks guys keep it up.

ASSad NO ceasefire please.....i want Syria to have ateast 30 years of civil war and millions and millions killed.until then all i can say is :
Long Live The Syrian Civil War!