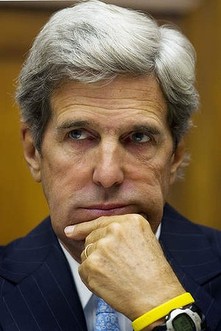 Secretary of State John Kerry is working to try to free up almost $700 million in aid for the Palestinians which has been held up in Congress, a top U.S. official said Monday.

"The secretary feels extremely strongly that it is time now to get this support to the Palestinian Authority," State Department spokeswoman Victoria Nuland said.

The department was working with Congress "to get appropriated money released for the Palestinian Authority because we think it's very, very important that they remain effective in supporting the needs of the Palestinian people."

Some $495.7 million was set aside for the Palestinian Authority in the fiscal year 2012 which ended on October 1, while another $200 million for this fiscal year was notified to Congress last week.

The money is earmarked for specific things in the Palestinian budget such as security as well as administrative costs.

However, an additional $100 million has been released, but can only be used on narcotics and law enforcement.

The Palestinian Authority is facing its worst economic crisis in years, in part because of a failure by donors to deliver pledged funds. But its finances were plunged further into chaos after president Mahmoud Abbas won upgraded U.N. observer status at the U.N. General Assembly.

Israel, which strongly opposed the move along with the United States, said it was suspending monthly transfers of the tax and tariff revenue it collects on behalf of the Palestinian Authority (PA) in the wake of the decision.

It did, however, transfer $100 million in a one-off payment in late January.

Nuland said Kerry had been very active on the issue of the Palestinian aid with Congress since he took over as secretary of state on February 1.

FT: I beg you not to try to understand anything about economics.