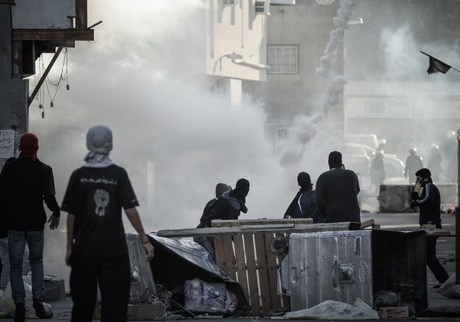 A teenager was shot dead near Bahrain's capital on Thursday as clashes erupted when hundreds took to the streets to mark the second anniversary of a Shiite-led uprising against the kingdom's Sunni rulers.

Protesters, chanting "Down Hamad" in reference to the king, responded by hurling petrol bombs at the security forces, they said, and a 16-year-old boy was shot and killed during the confrontation, according to the opposition.

On the eve of the anniversary, the opposition held a new round of reconciliation talks with the government and its supporters, although there was still no sign of a breakthrough.

The opposition identified the slain teenager as Hussein al-Jaziri, saying he had been killed in the Shiite-populated village of Daih near the capital Manama.

Jaziri was "wounded by a shotgun that regime forces fired... He was severely wounded in his stomach and died at the hospital," said al-Wefaq, the main Shiite opposition bloc.

The interior ministry said that "a wounded person who was brought to al-Salmaniya hospital was pronounced dead."

Opposition groups had called for strikes and nationwide protests on Thursday and Friday to mark the Arab Spring-inspired uprising that began on February 14, 2011 and was crushed by the security forces about a month later.

Public security chief Major-General Tariq al-Hassan had warned late on Wednesday that "those who engage in any type of illegal behavior will be dealt with swiftly".

But demonstrations took off in the villages of Barbar, Bilad al-Qadim, and Sitra where protesters waving Bahraini flags chanted: "The people want to overthrow the regime".

They tried to march towards what was once known as Pearl Square in central Manama, the symbolic center of the uprising where protesters had camped before being driven out by security forces.

Police were heavily deployed around the square in a bid to dissuade gatherings.

The violence subsided in the afternoon, despite online calls for further demonstrations.

Activity in Manama appeared normal and shops remained open at the kingdom's largest shopping mall as well as in Manama's business center.

The violence came after representatives of the opposition held a new round of a national dialogue on Wednesday with the government and political groups that support it.

The dialogue, hailed by the United States as a positive step that could bring reforms to satisfy all Bahrainis, resumed at the weekend for the first time since they broke down in mid-2011.

The opposition, which wants a constitutional monarchy, is demanding that the results of the talks be put to a referendum and not be submitted to King Hamad for approval.

Its representative Sayed Jameel Khadim said agreement was reached in Wednesday's talks for the regime to act as "a main party in the dialogue and that its outcomes be turned into constitutional drafts".

Many people in Shiite villages see no difference between the two groups.

"In the afternoon, we are with al-Wefaq," which organizes peaceful demonstrations authorized by the government," said a resident of the village of Sitra, southeast of Manama, who asked not to be named.

"In the evening, we respond to the February 14 Youth Revolution Coalition" calls for protest.

Bahrain has been in political deadlock since February 2011, with the government refusing to make political concessions.

The two years of unrest have left at least 80 people dead, according to international rights groups, and many detained activists are on trial for their involvement in the unrest.