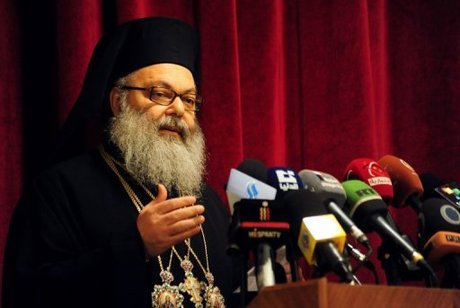 Patriarch of Antioch and All the East Youhanna X Yazigi celebrated mass at the St. Nicolas Cathedral in Beirut's Ashrafiyeh district on Sunday in the presence of the country's top political and spiritual leaders.

The mass was held on the occasion of Yazigi's visit to the Beirut Bishopric.

In his sermon, the Greek Orthodox leader stressed that Muslims are partners in the nation.

“Our ties with them extend beyond coexistence. We share with them building the future,” he said.

“We built together with Muslims the civilization of the country. That's why we should preserve it together,” Yazigi said.

He described Lebanon as a space of freedom and openness, saying: “It's the nation of everyone despite their differences.”

Yazigi also prayed that Syria remains away from destruction and to witness peace.

Yazigi met on Monday with Syrian President Bashar Assad, a day after the newly-enthroned leader appealed for dialogue and peace in the war-torn country.

Patriarch Yazigi, Did you ask Bashar al Assad when will he stop slaughtering the Syrian People?

Bless him and his wise words.

What a champion. Wise words from a wise man. I suggest the M14 bunch of backward and Salafist thinkers listen and LEARN! It's a pity they won't. ORTHODOX Proposal was bass!

Very wise indeed if you say so..