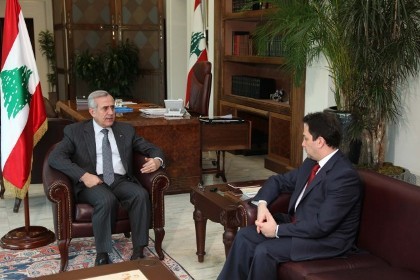 The presidency announced on Monday that President Michel Suleiman had requested that the Justice Ministry take legal action against Internal Security Forces chief Major General Ashraf Rifi over his refusal to obey the orders of caretaker Interior Minister Ziad Baroud.

On Thursday, Baroud had ordered Rifi to pull out ISF Intelligence Bureau personnel from the second floor of the building affiliated with the telecom ministry, where OGERO Telecom is in charge of the installations of the third mobile network donated by China to Lebanon according to a cabinet resolution.

Suleiman, Baroud, state prosecutor Saeed Mirza and caretaker Justice Minister Ibrahim Najjar discussed at the Baabda Palace on Saturday “the judicial, legal and administrative measures pertaining to the implementation of the interior minister’s resolution on the withdrawal of the ISF personnel from the telecom ministry building” in al-Adliyeh district, according to An Nahar.

A dispute erupted last Thursday between caretaker Telecommunications Minister Charbel Nahhas and security forces at the building when the latter denied the minister entry to the second floor of the building where he was seeking to dismantle the third GSM network.

The ISF justified its action by saying that the deployment of security forces during the installation of such networks is part of routine procedure, adding that dismantling the network requires Cabinet’s approval.

SINCE WE ARE ON JUSTICE,PLSE FAKHAMTO WHAT ABOUT INVADING THE AIRPORT TO WELCOME A CERTAIN GENERAL WANTED FOR INTERROGATION BY THE SAME MINISTER OF JUSTICE.

Rifi deserves it, but he shouldn't be the only one.
The entire political cast, march 8&14, is corrupt and should be exterminated to pave the way to a new generation of young citizen-politicians.
Why are we still trusting those who are responsible of the civil wars, of the Syrian occupation, of the Israeli occupation, of the huge debts, of turning Lebanon into a playground for foreign powers?

This is just theatrical. Military court is the appropriate way to go.

@AnonymousLb very well said! You are so right and I do hope many people think like you! It's ridiculous how followers of 14 & 8 try to justify every wrong-doing and actions taken by their gangster leaders!

President showing again his weakness and selective acts. Both Rifi and Nahas should be investigated for disciplinary actions. Nahas actions are more dangerous because they place public institutions at the service of political parties allowing individuals close to this party to benefit financially so they can fund the party in return in an incestuous relationship known as political mafia. National security at risk as sensitive communication will be penetrated by Hizb under Nahas. But greatest danger is political mafia, worst type of political corruption, mastered by Aoun and his ministers. Nahas degrades whole cabinet. His vindictiveness will cause many decent Lebanese to emigrate disgusted by M8 Basij-like actions. M14 has failed to represent the Cedar Revolution. Free Lebanese should declare independence from M14 and start tracking all individuals and businesses illegally benefitting from this political mafia so soon they'll have their day in court as in Egypt. We’ll make sure of it.

Rifi deserves it big time,she should have followed the minister s instructions.
But hey Mr President?
what about the One who set beirut on fire claiming he is protecting his own private network?you were the chief army no?
you were hiding bil yarze no?typical lebanese army chief.
Oh and the killer of Samer Hanna?and the rat that gave the order to kill him???
£am ta3moul rejjel ala Riffi????
Eh battal walla.