Yazbek to Lebanese Residents of Syrian Towns: We Won't Forget You 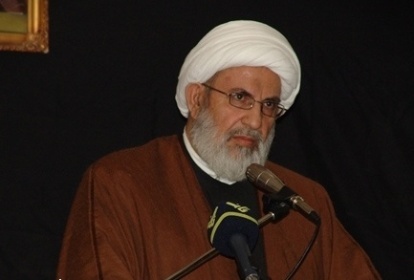 Hizbullah on Sunday announced that it will not neglect the issue of protecting Lebanese residents who live in border towns inside Syria, stressing that “there will be no solution in Syria except through politics and dialogue.”

“To those screaming that the state should be in charge of defending its people: Has the state protected and defended the Lebanese residents who live inside Syria?” head of Hizbullah's religious committee Sheikh Mohammed Yazbek said.

“All the Lebanese must raise their voices high in defense of the Lebanese residents of Syrian towns who are suffering harm and injustice,” Yazbek added during a memorial service held at the Hermel town of al-Qasr for Osama Msarra, one of the Lebanese killed in recent clashes with Syrian rebels in the border area.

Addressing the residents, Yazbek went on to say: “Excuse them, they are busy with the electoral laws, showoffs and the blocking of roads, but we will not overlook your plight and we will remain loyal. We will stand on the side of right and the side of the aggrieved.”

“We are not attacking anyone but we will not allow anyone to attack us. We cannot stand idly by as our people, women and children are being aggrieved. We cannot tolerate to be uprooted from the land we have inhabited for tens of years as long as there is blood in our veins,” Yazbek added.

Just hours earlier, the main bloc of the Syrian opposition accused the Damascus ally of having intervened "militarily" on the side of the regime, and warned this posed a threat to ties between neighbors Syria and Lebanon.

But Yazbek stressed that “our only enemy is Israel.”

“Those who believe they are strong must seek to liberate the holy sites and to defend Palestinian captives in Palestine. Why don't they send fighters to liberate Palestine?” Yazbek added.

He pointed out that “there will be no solution in Syria except through politics and dialogue.”

Hizbullah has systematically denied sending fighters into Syria, though its leader Sayyed Hassan Nasrallah acknowledged in October 2012 that party members had fought Syrian rebels but said they were acting as individuals and not under the group's direction.

“The residents of these towns took the decision to stay and defend themselves against the armed groups and did not engage in the battle between the regime and the opposition,” Hizbullah's leader added.

The Syrian Observatory for Human Rights said the three slain Lebanese were members of pro-regime militias who had been trained by Hizbullah.

Louay al-Meqdad, spokesman for the Supreme Council of the Free Syrian Army, has accused Hizbullah of shelling Syrian territory with artillery and rocket launchers from bases inside Lebanon.

We should send the Hizb to Nigeria and the rest of west africa as there are lebanese being attacked there. Lebanese citizens are being killed by regime forces inside lebanon and the hizb is silent. I guess that is ok!

“To those screaming that the state should be in charge of defending its people: Has the state protected and defended the Lebanese residents who live inside Syria?” head of Hizbullah's religious committee Sheikh Mohammed Yazbek said.

YOU ASHURA BRAIN DAMAGED MORON THE SYRIAN STATE SHOULD PROTECT THEM THEY LIVE IN SYRIA!

Who was your enemy in May 2008 ,there was no Jews in Beirut or the Chouf region ?

You have put them in danger you nuthead, you criminal ! As Joumblatt said today you are an offshoot of the basij, taking your orders from Iran . Iran who is plundering its people's wealth running after illusory goals ! Wait till Assad falls, you will be turned to minced meat, and we will applaud to that!

so when some were calling for border demarcation with syria a while back to figure out where are the true border is, HA and co called them traitors ..blah blah blah ...the usual symphony that sells wells to the 99% illiterate arab masses. Now, i suppose it maybe a good time to resurface this issue to find out who is where and why..

You're the enemy who has put the border town residents in danger, ya h2mar, not the FSA you want to protect them from!

“Those who believe they are strong must seek to liberate the holy sites and to defend Palestinian captives in Palestine. Why don't they send fighters to liberate Palestine?” Yazbek added..........
Is he referring to Hezb and Assad? They were the strong ones for the last 20 years, so why did they not do just that?

I grow stupider for everyday that I read the comments on this site.

george710 it's a side effect of prolonged listening to speeches by the likes of Yazbik, but you weren't a bargain to begin with so no great loss.

Are you admitting that Assad's Army is not protecting the people on the Syrian soil? why are you interfering in his Country or you are accustomed in taking matters with your own hands as farm boys do?

Its not like anybody who comments on this website is accustomed to do anything except hide behind a computer screen.

And what are the insults for I did not insult you. How about showing some common decency and respect maybe then you will get the worthless online recognition from these trolls that you are looking for.

would they do the same if they were sunnis? i guess not.....

Ya Yazbek fear Allah dude and stop your lies and intimidation...go to the mosque and pray and stay out of politics...what a bunch of hypocrite clergy...enough is enough...