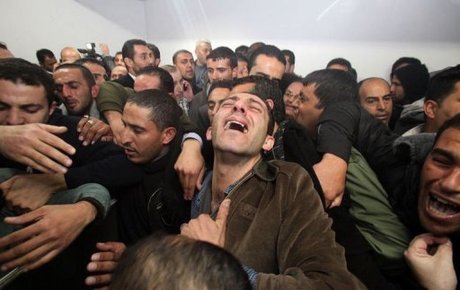 Militants of the Al-Aqsa Martyrs Brigades, the armed wing of Palestinian president Mahmoud Abbas's Fatah movement, vowed Monday to avenge the death of a prisoner they say was tortured in an Israeli jail.

"This horrific crime will not go unpunished and we promise the Zionist occupation that we will respond to this crime," said a statement distributed to crowds at the funeral of Arafat Jaradat, while armed and masked members of the militant group watched from rooftops, Agence France Presse journalists at the scene reported.

The militants were among thousands of people, many waving Fatah banners or Palestinian flags, who flocked to Sair, Jaradat's home village near the city of Hebron in the southern West Bank, for his burial there.

"Al Aqsa brigades, the armed wing of the Fatah national liberation movement, mourns with all pride its hero, the martyr of freedom, the prisoner Arafat Jaradat," the statement said, in reference to Jaradat's membership of the group.

Palestinians have been staging regular protests demanding the release of prisoners, particularly several who are hunger strike, but the tension soared after Jaradat's death.

Israeli prison authorities had initially said he appeared to have died of a heart attack.

Qaraqaa said the autopsy carried out at Israel's national forensic institute in the presence of a Palestinian doctor, indicated bruises on Jaradat's torso and damage to muscles, as well as broken ribs.

Israel released a similar account of the post mortem but stressed that there were "fractures in the ribs" which "could be testimony to resuscitation efforts."

"These preliminary findings are not sufficient to determine the cause of death," a statement from Israel's health ministry read, noting that microscopic and toxicological findings were still pending.

It concerns me that they cry over someone who died in prison but celebrate the death of a suicide bomber? Go figure.