Arslan Meets Berri: Consultations to Reach an Agreement over Consensual PM-Designate are Ongoing 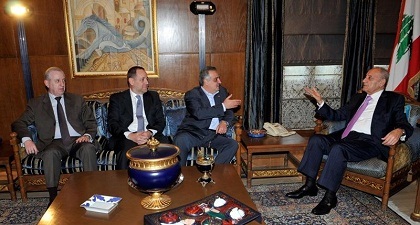 Lebanese Democratic Party leader MP Talal Arslan hoped on Thursday that Speaker Nabih Berri would be tasked to find a consensual figure to head a new government in Lebanon.

He said after talks with the speaker at Ain el-Tineh: “Consultations are ongoing to reach an agreement over a consensual candidate to head the new cabinet.”

He denied to reporters that an agreement had been reached over a possible candidate.

“I hope all the Lebanese, regardless of their political affiliations, would negotiate with Berri an agreement over a candidate who we trust would be able to garner sufficient consensus,” added the MP.

On the possibility of nominating MP Tammam Salam, Arslan remarked: “I do not take decisions without consulting with Hizbullah and other allies.”

“We are keen on a figure who enjoys consensus among all parties,” he stressed.

“My political affiliations are clear and I am still committed to them. I am not proposing my choice of candidate, but I am trying to overcome obstacles in the process of naming a new premier,” he explained.