Jumblat Confirms his Alliance with March 8, Meeting at Parliament was ‘Nice Coincidence’ 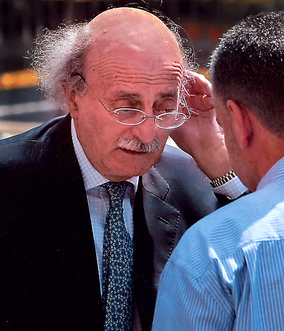 National Struggle Front bloc leader Walid Jumblat said Wednesday that he confirmed his alliance with Speaker Nabih Berri and Premier-designate Najib Miqati during talks they held along with several MPs at parliament.

The Druze chief told al-Jadeed TV that the meeting he held with Miqati, Berri and MPs Michel Aoun, Suleiman Franjieh, Mohammed Raad, Talal Arslan and Assaad Hardan, all members of the March 8 forces, was a “nice coincidence.”

“The atmosphere was positive,” he said, adding that he confirmed his alliance with all the conferees.

His remarks came after a report by An Nahar daily that the blocs of Jumblat and Miqati have fallen out of the new parliamentary majority which now allegedly includes only Hizbullah, Amal and Aoun’s Change and Reform bloc.

The new majority is now a minority as created by the parliamentary elections of 2009, the newspaper said about the decision of the Jumblat and Miqati blocs to boycott a parliamentary session to renew the mandate of Central Bank governor Riyad Salameh and discuss 48 other items listed on the agenda.

good calculations jumblat,another 4-6 months in the life of the syrian regime.