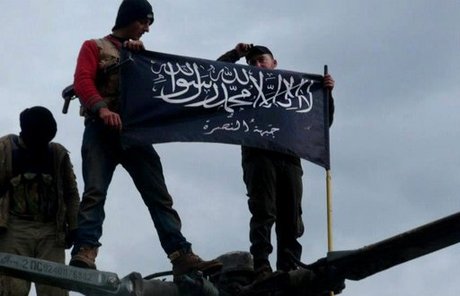 The head of Syria's jihadist al-Nusra Front on Wednesday pledged allegiance to al-Qaida chief Ayman al-Zawahiri in an audio message, but distanced his group from claims it had merged with al-Qaida in Iraq.

But, he added, "we were not consulted" on an announcement by al-Qaida in Iraq chief Abu Bakr al-Baghdadi on Tuesday of a merger with al-Nusra Front.

"We inform you that neither the al-Nusra command nor its consultative council, nor its general manager were aware of this announcement. It reached them via the media and if the speech is authentic, we were not consulted," Jawlani said.

He added that the group would not be changing its flag or its "behavior."

"Al-Nusra Front will not change its flag, though we will continue to be proud of the flag of the Islamic State of Iraq, of those who carry it and those who sacrifice themselves and shed their blood for it," said Jawlani, acknowledging he had fought in Iraq alongside the ISI, al-Qaida's Iraqi branch.

"We reassure our brothers in Syria that al-Nusra Front's behavior will remain faithful to the image you have come to know, and that our allegiance (to al-Qaida) will not affect our politics in any way," he added.

Jawlani's comments came a day after the ISI made a surprise announcement that al-Nusra was part of its network, confirming long-held suspicions that had led the United States to put the Syrian jihadist group on its terror blacklist.

"It is time to declare to the Levant and to the world that the al-Nusra Front is simply a branch of the Islamic State of Iraq," ISI's chief Abu Bakr al-Baghdadi said in an audio message.

The groups would be combined and called the Islamic State in Iraq and the Levant, Baghdadi said, describing Jawlani as "one of our soldiers".

"We chose al-Jawlani... as well as other fighters to go from Iraq to Syria... We prepared plans and work policies. We gave them money and personnel support," Baghdadi said.

The announcement followed a message from Zawahiri, urging rebels to fight to establish an Islamic state in Syria, and was received with caution by the mainstream rebel Free Syrian Army.

"We don't support the ideology of al-Nusra," FSA spokesman Louay Meqdad told Agence France Presse, stessing: "There has never been and there will never be a decision at the command level to coordinate with al-Nusra.

"Al-Nusra exists, it is financed and it is armed. That's why certain brigades of the FSA cooperate with them on certain operations on the ground," he added, warning that "no one has the right to impose on Syria what shape their state will take.

"Syrians will go to the polls to choose their leaders," Meqdad said. "Our goal is clear -- to bring down the regime and establish a democratic state."

LOL this sounds like a business article about 2 companies "merging". Which industry is FSA-Al Qaeda and Nusra Front a part of? The self-detonating, head-chopping, women and children slaughtering industry?

The US and Europe should openly Arm the FSA as counter balance on the ground and when the time comes to disarm Al Nusra or eliminate them all together...I think many Syrians that joined Al Nusra will quit after the butcher Assad is killed...

It would be quite hard to de-radicalize those that have joined al-Nusra once Assad falls.

Doesn't sound too far off from HA

As I said all along
watch what you wish for in this so called Arab Spring
look out at the Iraq, Egypt, Lybia and Syria

FT, let me ask you this.

what do you think about nasrallah's speech about christians being occupiers that he made in the 80s. im sure you know which one im talking about. its widely used by M14ers to say look at how HA is not innocent.

now if i remember correctly your answer in another article, you talked about how it was the early days and different situation and HA has grown to learn to integrate and that they cannot eliminate any one group or sect.

my question here is: why is it not possible for the FSA, assuming it is all a one color terrorist group according to you, to grow over time and learn the same lessons HA did?

FT, you couldn't have answered that any better. Great points.

My only question is, you mention "If FSA initiates dialogue...", at this point dialogue is not in the hands of the FSA and the regime. The regime lost that trust, it lost that privilege. It lost that privilege when it was too stubborn to step down and allow for an interim government, and avoid the chaos in Syria today.

For all their faults and fragility, the opposition should undoubtedly lead the transitory government, simply because there is no better alternative (certainly not the regime).

thus clearly stating that Nusra is not FSA, and FSA is a legitimate group of rebels who have taken up arms against a violent regime. maybe you didnt say it in so many words but the spirit is clear :p

ba3dein how many groups participated in the war in lebanon, with each their own agendas etc. no one came up on top, just like in lebanon, no sect or party was able to eliminate the other.

there is no reason for you to claim that nusra has taken over most of the rebellion. people imagine lebanon as a desert with camels and terrorists everywhere because of the media focus on these places that represent only a small percentage of the country. dont you think there is a similarity in the way you perceive FSA? im sure you are not in syria living and fighting on fronts etc to say you know for a fact or that you have seen with your eyes

I think what FT means to say is (correct me if I'm wrong) that the FSA's allied stance with Al-Nusra delegitimizes it. The fact the FSA can stand up to Al-Nusra and doesn't reduces its moral position.

Still, I'm not sure what the FSA can do about al-Nusra. If it stands up and battles it, then it'll fragment the opposition and make it a less effective force in combatting the regime. Battling al-Nusra is probably what Assad wants, for the opposition will be fragmented and ineffective.

But if the FSA doesn't stand up to al-Nusra, then people will blast it for allying with terrorists. I think, as the FSA's spokesman said, that for the sake of battling the regime it'll have to tolerate al-Nusra, but once a new order is in place it will confront it.

i dont think its a surprise to anyone that the basic human instinct is survival and a human will do anything it takes including selling his soul to the devil to survive.

faced with allowing nusra in to help or letting nusra do it alone, or option 3 being giving up and going back to square one after all the losses, it was clear what choice they had.

lol....the entire point of this revolution was to get rid of this piece of shite bashar, and now they are supposed to stop the war, start killing the people who are helping them in their original goal, just to make the guy they hate happy enough to give them a little piece of the pie, and let him stay in power!? hahahaha....yeah after all the blood and suffering and sacrifice I'm sure the syrian people would just love to do that.

All thats missing is for these franchisees' is ringing the open bell at the NY stock exchange tomorrow morning with a brand new name lol ,ho ho ho walla Christmas has come early for the investors ! Bloody fanatics , these terrorist would even cut your grandmothers head off if given half the opportunity ,,,,

lovely neighborhood... Who pays the salaries of these weirdos?

And that, everyone, is the Syrian crisis in a nutshell.

united against nusra only?divided on everything else will it work?no...the only solution is:
1) state of lebanon
2)abolish the religious mazhabi regime,by kicking out all interference from religious leaders in civil politics
3)civil marriage , which is a , must condition , to solidify the civil life.
or keep aoun berri jumblat hariri,sorry if i missed somebody.....and enjoy the END

za2if. it is simpler than that. Think of salafists as a tool since they are purchasable mercenaries. Salafists are a tool that bachar used in nahr el bared and in Irak. And now these same salafists are being used against him by qatar. nothing more to it.

Too much garbage in the landfields. It is time to get rid of the filth, scum and cancer so the rest of can live our lives, breath the clean air, and cultivate the soil for a better future. Ironic to hear Wahabi/Al-Qaida or filthy Persian types, sympathizers, supporters think they are better than Israelis. They're all the same and deserve each other. The rest of us don't need them.

Just what everyone "needs," more uneducated fools with guns.