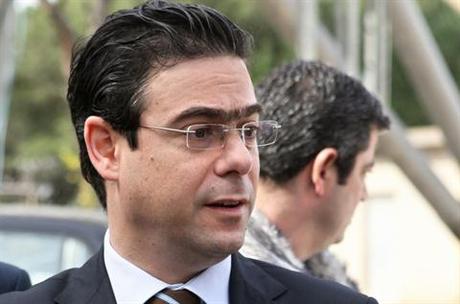 It said that as the ministers were on a hunting trip in Africa, Sehnaoui decided to rest by the rhinoceros, which he mistook for a rock.

The animal soon turned its attention to Sehnaoui and attempted to attack him.

The minister began to run away from the rhinoceros, while Kheireddine and their companions scared off the animal with their sticks.

good one, they probably had the trip expensed by the government because they went to learn from their technology :)

Don't tell Sahnawi and Bassil they take credit for it

they were on a jihadi mission which they could not disclose! welcome to march 8 politics! i bet that the government paid for this trip!

Phil, based on my experience they do have better internet access in South Africa than Lebanon. Heck during a recent safari, I had 3G internet access on the game reserves.

this is to show what fpm ministers are about :)
this is truly funny :)

kheireddine is not M8. is he?

somebody is having fun...

unibrow attacked by unihorn, you can't make this up!

Rhino is pissed about 3G not working, Ogero not installing his adsl for the past 18 months, Internet Quota limitations, exorbitant prices ...

What a joke to mistake rhino for a rock......
Nice way to get attention....should have been on u tube or funniest video of the year.
Sad

According to Wikipedia a Rhino has a "relatively small brains for mammals this size" same thing applies to Sehnaoui, probably what began as a battle of wits quickly degenerated into this.

Poor rhino minding his own business and these good for nothing lebo politicians frighten him.

it tells a lot on how they consider the lebanese people.... lebanese are in great difficulties and our ministers are hunting in africa... it shows once more that they don t give a sh... about their job and have NO RESPECT for the people in this moment of crisis!!!!!

I am sure the rhinoceros was interested in socializing with the minister.

Lying and distorting facts is Aoun and Hizbollah's territory... no one but you assumed they were hunting rhinos...

Jokes aside, the Rhinoceros is in fact one of the stupidest animals on the planet. It has a notoriously small brain relative to its body mass.
They've been observed to run for 10 seconds when surprised or approached before realizing there's no threat, meaning it takes ten seconds of relying on purely instinctive reflexes until a brain neuron kicks in.

I heard Sehnaoui embezzled 50 million dollars as Minister, it is good he is spending a little from it now, to enhance the economy of Africa!

sorry to disappoint all the poor blind 0,14th march commentors who beleive anything they read ! both ministers and their guides were rescuing a injured zebra (that's an obligation for hunters)when a rhino who was following the zebra charged them; theu ran and stood behind trees until the rhino changed his route; no rock and no sticks...
that happened during a safari at christmas; and of course, the 4 hunters each paid his trip !