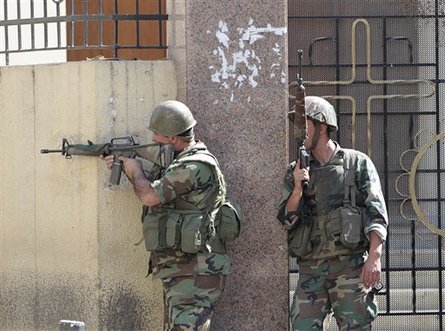 The army on Sunday carried out raids in the area of al-Sharawneh in the eastern city of Baalbek after it engaged in a gunbattle with gunmen, the military command said.

The communique said that an army patrol came under fire by gunmen as it was raiding the house of a suspect in al-Sharawneh.

But the military unit fired back and launched raids in the area to arrest the armed men and to hand them over to the judiciary.

The area has witnessed several attacks on the army in the past.

its funny thinking about that all the places that needs to be whipet out is hizb iran fans.
and still this is the same people that scream loadest that they should run the country.
ironic!

Our nations army looses more soldiers to radical factions in Lebanon than they do against Israel!

Mowaten we all share you hope here, however you know one call from the right sect here will over rule anything the army is trying to do. The Army is sadly a used and abused entity in Lebanon and as expected will but do and die at the end of the day.

I hope they launch an offensive against hezbollah...it is the only organisation in lebanon that uses its sectarian affliations to muster external support from nations or parties similar to its sect. It has infact threatened the entire secular fabric of lebanon by interfering into syria,s affairs....shame