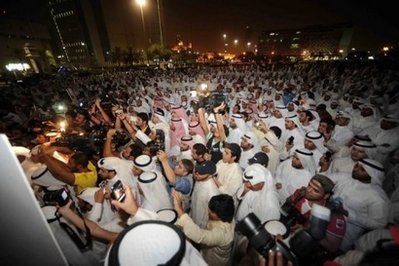 Hundreds of Kuwaiti youths have rallied for the ouster of the oil-rich Gulf state's prime minister and for democratic reforms to resolve an ongoing political crisis.

Protesting for the fourth straight week late Friday, the youths also called for the removal of deputy premier Sheikh Ahmad Fahad al-Sabah who local media reported has submitted his resignation.

Prime Minister Sheikh Nasser Mohammad al-Ahmad Al-Sabah and Sheikh Ahmad, both senior members of the ruling family, have allegedly been engaged in a power struggle that became public in a session of parliament on May 31.

During the session, MPs said to be close to the prime minister voted against a request by Sheikh Ahmad to refer a grilling against him to a parliamentary panel to investigate whether it breached the constitution.

A document distributed at the rally carried the signature of 16 opposition MPs in the 50-member house, calling for the sacking of the premier, his deputy and the entire cabinet, citing rife corruption and failure to run the country.

Opposition Islamist MP Faisal al-Muslim also called for major constitutional reforms to take Kuwait out of its political turmoil, and appealed to the ruler to dismiss the prime minister and the cabinet.

The Gulf emirate has been rocked by a series of political disputes over the past five years, stalling development despite abundant financial surpluses amounting to $300 billion.