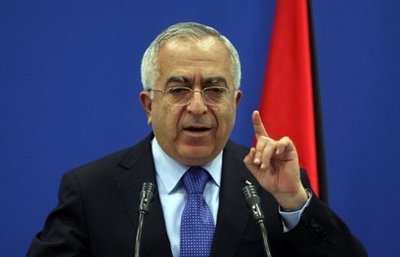 Fatah will seek to keep current prime minister Salam Fayyad at the helm of a new government, an official said Sunday, but the nomination was immediately rejected by Hamas.

The central committee of Fatah, headed by president Mahmoud Abbas, agreed at a Saturday night meeting to throw their support behind Fayyad, a member of the committee told Agence France Presse.

The decision ends weeks of speculation about whether the movement would push for Fayyad to retain his post at the head of the transitional government of independents mandated by a unity deal that Hamas and Fatah signed last month.

"During a meeting last night at the presidential headquarters, we decided to nominate Salam Fayyad to head the Palestinian government," the central committee member said.

Hamas had already hinted it would not support a Fayyad candidacy, saying early on that it wanted a prime minister from Gaza. Fayyad was born in the West Bank.

And on Sunday, Hamas spokesman Sami Abu Zuhri downplayed the nomination, and warned that Hamas had made clear its opposition to Fayyad.

"Hamas informed Fatah during the last meeting of its rejection of the choice of Salam Fayyad to head the new government," Zuhri told AFP.

"The Fatah central committee's nomination of Salam Fayyad to head the government is a Fatah nomination and any head of the new government must be chosen by consensus and not, of course, by one of the parties."

Fatah's decision comes ahead of a Tuesday meeting in Cairo between officials from the rival Palestinian factions, as the two sides try to hammer out a deal on the make-up of the new government called for the unity deal.

The surprise agreement, intended to end years of bitter feuding, calls for a government of independents to lay the groundwork for presidential and legislative elections within a year.

On Saturday night, after the central committee meeting, Fatah representative Azzam al-Ahmed, who helped broker the unity deal, said the next round of talks should yield a final government line-up.

The central committee "decided to continue communications with Hamas and the other factions in order to form the Palestinian government as soon as possible."

"The two sides will meet this Tuesday to form a government, and we hope that this will be the last round (of talks) needed to finish the make-up of the government," he told AFP.