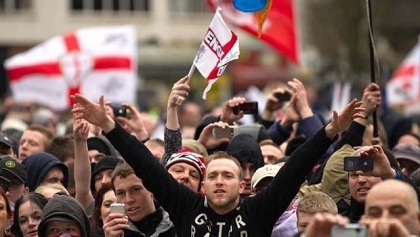 Six Islamic extremists admitted on Tuesday planning to attack a far-right rally in England with guns, swords and a nail bomb, in a plot that only failed because they turned up late.

The court in London heard that their plan to attack the far-right English Defence League (EDL) only failed because the rally in Dewsbury, northern England, finished earlier than expected.

Police only uncovered the plot thanks to a routine traffic stop.

"This will attract significant custody, there is no doubt about that," judge Nicholas Hilliard told the men, whose sentencing was scheduled for June 6.

Police and security services were not aware of the planned attack on June 30, although Uddin was under surveillance in connection with another jihadist plot.

Ahmed was also on bail at the time for possession of terrorist documents.

The court heard that all of the men except Hasseen traveled to the rally in the West Yorkshire town armed with two shotguns, swords, knives, a nail bomb containing 458 pieces of shrapnel, and a partially assembled pipe bomb.

Police estimated there were up to 750 EDL supporters at the rally, as well as dozens of officers and passers-by.

But when the jihadists arrived in Dewsbury, they found that the protest had dispersed two hours earlier.

The plot was only uncovered because a traffic officer stopped Uddin and Khan on a motorway as they returned to their hometown of Birmingham in central England.

The officer found that their car was uninsured, so it was impounded and staff at the pound later discovered the arsenal.

There were also 10 copies of a note addressed to Queen Elizabeth II and Prime Minister David Cameron, describing them as "enemies of Allah".

Addressing the EDL directly, the letter said: "We have heard and seen you openly insulting the final messenger of Allah... you should know that for every action there is a reaction.

"Today is a day of retaliation (especially) for your blasphemy of Allah and his messenger Muhammad. We love death more than you love life."

CDs of speeches by the American-born Al-Qaida preacher Anwar al-Awlaki, who was killed by a drone strike in Yemen in September 2011, were also found in the car.

The court heard that Uddin had already come to the authorities' attention because of his minor involvement in another Islamist plot, collecting "charitable" donations on the street for a group of extremists who planned to detonate a string of rucksack bombs.

Irfan Naseer, 31, Irfan Khalid and Ashik Ali, both 28, were jailed for the Al-Qaida-backed plot last Friday.