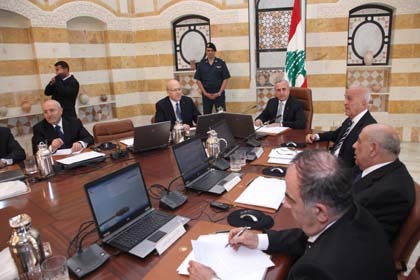 There has been a massive accumulation of daily, managerial and economic problems, the sources said.

After five months of deliberations, Miqati on Monday announced the formation of a 30-member government in which Hizbullah and its allies hold a majority.

Good! Maybe they can finally investigate the foreign sources funding Hizbollah's activities and how Bassil got to own a myriads of properties in Batroun... from his government salary? We're also anxious to know how soon they can start border demarcation will their friend Assad.

It is fortunate that no woman wanted to be part of this radioactive government with Assad/Ahmadinajad imprints all over it. Mikati wanted a harmonious effective cabinet. LOL. And here the results: Baroud, Rahal, Khalife, Najjar, Sayegh, Mitri, Harb, and Murr who brought effectiveness and dignity are out and Bassil, Nahhas, Fattoush, Abboud, Qanso, Karami, Arslan, Sahnaoui who represent the worst and most ineffective and contrarian individuals with street manners are in. These are the new members of the political mafia. Mr. Mikati: stop taking Lebanese for stupid. You committed a major mistake/treason and we were willing to give you another chance. Now we will simply say loud and clear: Go To Hell to you and your ministers. We can’t wait for Cedar Revolution II in 2013 to get rid once for all of all this garbage.

Dear Mr. "Gebran Sons, etc...", first it would be more honorable for you to spell out your real name instead of hiding behind a slogan which you don;t deserve, because Gebran at least had dignity and courage which costed him his life.
As for the ex-ministers, and apart from Baroud, Khalife & Sayegh who deserve respect and recognition for what they are and did, the others are not worth of being called Lebanese. It;s expected that people like you shoot bullets at the new government...but any reasonable human being should be constructive, even if in the opposite camp. Wait till the new governmental team starts working and judge them later on their achivements!
The only constant factor is the more than poor results of the succesive Hariri clan governments that led to 55 bn $ debt and massive immigration.
Try to use your brains before commenting and learn to be patient.