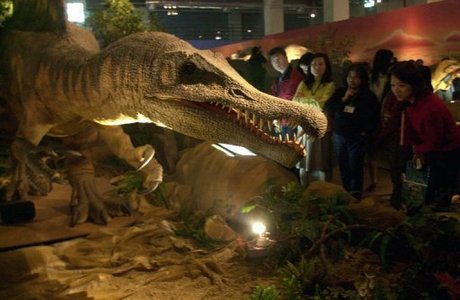 The neck bone of a crocodile-faced dinosaur species has been found in Australia, scientists said, showing the creature roamed much further than previously thought.

The vertebra of a Spinosaurus was found near southern Victoria's Cape Otway lighthouse and belonged to a relatively small two-meter (6.6-foot) beast which lived about 105 million years ago, said researcher Thomas Rich.

A "spine lizard" with a long, narrow snout like a crocodile, the Spinosaurus was known to live in Europe, South America and South Africa, Rich said, but this was the first time its remains had been discovered in Australia.

"The fact that they existed in Australia changes our understanding of the evolution of this group of dinosaurs," said Rich, a curator at Museum Victoria.

Published this week in Biology Letters, Rich's paper on the discovery says it also challenges the idea that Australia's fauna was endemic, or unique, in the Early Cretaceous period.

"The same groups of dinosaurs were widespread when the Earth was once a supercontinent," said Rich.

"When the Earth evolved into separate continents, the various families of dinosaurs had already reached those landmasses, which explains why the same ones have been found in places now far apart from one another."

Dwelling both in water and on land, the Spinosaurus was thought to rival Tyrannosaurus rex in size, growing up to 18 meters long and weighing up to 21 tons.