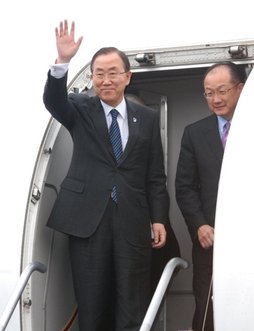 Rwanda is key to ensuring peace in the volatile eastern Democratic Republic of Congo, U.N. chief Ban Ki-moon said Friday as he toured the region to boost a new deal to end decades of violence.

A United Nations-brokered accord, signed in February by 11 regional countries after a bloody uprising by Congo's M23 rebels, seeks to quell a long-running conflict in mineral-rich eastern Congo, which neighbors Rwanda.

That deal "is the best chance for peace in many years," Ban told reporters in the Rwandan capital, fresh from a visit to the DR Congo.

"I am appealing to all leaders to play their part... Rwanda is critical to the framework's success," he added.

Rwanda plays a key role in the region and has been accused by the U.N. of backing the M23 fighters, a claim it denies.

Ban's visit to the region comes after days of fresh fighting between the rebels and Congolese forces that ended months of relative calm in the war-torn region.

On Thursday Ban toured the flashpoint Congolese city of Goma, which remained peaceful during his visit.

Both Kinshasa and the M23 rebels have accused each other of launching hostilities and trying to scupper peace efforts in the restive east.

The latest bout of fighting near Goma, which was briefly seized by the M23 rebel group last November despite the presence of a large U.N. peacekeeping force, has sent thousands of people fleeing.

From Kigali, Ban flew to Entebbe in Uganda where he met with Ugandan President Yoweri Museveni.

Uganda has also been accused of backing M23, but rejects the claims.

Ban said Museveni had assured him that peace talks between M23 and the DRC government would continue in Kampala.

"The people of DRC have suffered too much for too long. They are tired of war, tired of poverty, tired of impunity," Ban said in Entebbe.

"All across Africa countries are on the rise to reach their potential. There is no reason that DRC cannot follow suit."

On Thursday, Ban said that the deployment of a new U.N. intervention force of about 3,000 African troops should be accelerated in view of the fresh unrest near Goma, with all the troops expected to be in place in "about one or two months".

The force made up of Tanzanian, Malawian and South African soldiers was approved by the U.N. Security Council in March as its first ever "offensive" peacekeeping brigade.

Despite its vast mineral wealth, the DR Congo -- which covers an area roughly the size of western Europe -- is ranked by the U.N. as the world's least developed country and has been devastated by some of Africa's deadliest wars.

Also on Thursday, Ban visited a memorial in Kigali to Rwanda's 1994 genocide, saying he had been "moved to tears", accepting that the U.N. had "failed in Rwanda" at that time, and vowing to work to ensure "peace and development throughout the Great Lakes region."

Some of those who carried out Rwanda's genocide -- ethnic Hutu extremists -- have since formed rebel groups in eastern DR Congo.

The M23 rebellion in the east last year threatened to drag the region into a fully-fledged war.

M23 -- a largely ethnic Tutsi group of former army defectors -- has vowed to retaliate if attacked by U.N. troops but says it does not intend to retake Goma.

The U.N. has accused M23 of a string of rights abuses including arbitrary executions, forced disappearances and the raping of civilians.

Ban is headed to the Ethiopian capital Addis Ababa next for African Union celebrations on Saturday marking 50 years of the pan-African bloc.