Girl Killed, Another Hurt as 4 Rockets from Syria Hit Hermel 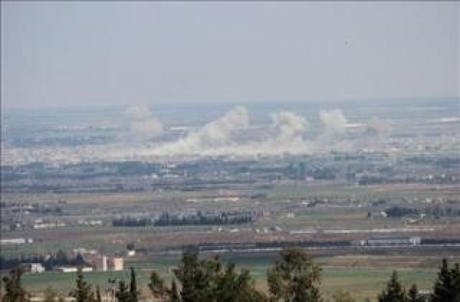 A girl was killed and another was wounded when four rockets fired from Syrian territory hit residential neighborhoods in the Bekaa city of Hermel on Monday, state-run National News Agency reported.

“Loulou Awwad, 17, was martyred and another woman from the same family was wounded by the rockets that targeted residential neighborhoods in Hermel,” NNA said.

Poor baby girl. The only ones to blame are the mass murderers killing innocent people in Qusseir.

Gracias Bani. It's the truth.

She is only 17. What a sad way to end such a young life. Goodbye Loulou. Peace Lebanon.

Very sad when civilains are killed. It's unlikely here that there was a military target. 54 civilains killed today in Iraq. Are those that rant on this site about killers of women and children off today?

The FSA will eventually find out which sewers to dynamite one day.. Nassy the Nazi has now several enemies, Israel, free Syrians and democratic Lebanese. The list will keep growing.

so sad and tragic and the self proclaimed resistance is part to blame as it fighting with the syrian regime.

the freedom fighters of lebanon seem to be actively keeping some very nasty work at bay in al qusair, I read quite a lot of comments from maronites on naharnet welcoming the extremists to lebanon over yesterday's grad 107mm attack in the chiyyeh area, would these same extremists spare the christians once they finish the shia job off I wonder? no. yet there they are, the christians, welcoming the crazies, begging them to engage the freedom fighters in civil war in lebanon.
You people are disgusting. From a Foreigner.

@the1, your post was not deleted per se, what happened I think is that it was a reply to a post that was indeed deleted. This archaic website is not sophisticated enough to delete or obfuscate only the offending text, instead the whole thread is gone. No worries though, we read it and I like it before it was gone ;)

My heart bleeds when I hear that innocent Lebanese people die especially children. I was so up set that I had to go jogging and come back and have few beers to forget but I can't. I was planning to visit Lebanon which I miss so much, but I can't because some people would not let the Lebanese state do it's job, what can I say, my people are perishing for the lack of knowledge. Oh Lord have mercy on Lebanon in Jesus name amen.

the arab shia will pay the price for the mulla faqih farsi dream.

Do you people have any heart at all. Never mind HA. This poor child was blown apart. Do you anonymous bloggers have any shame.

The people of Orsal...are very responsible...plus..the city of al eyn...plus the city of al labwiii..plus..plus..you will get the responses soon...

>>their own problem caused by their own actions.
Gaby, that is what pops your mind in front of the death of a small girl? Shame on you!