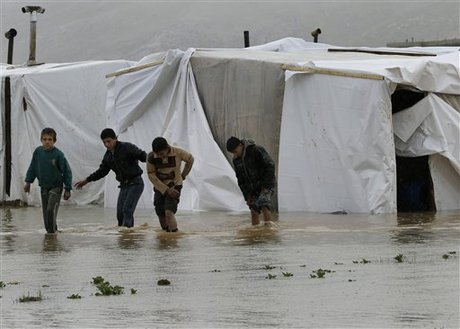 The Russian government on Thursday earmarked 10 million dollars in aid for Syrian refugees in Lebanon and Jordan that will be paid through the United Nations in the year 2013.

Russia's finance ministry was tasked with coordinating with the foreign ministry on how to transfer the funds to the United Nations.

Though that's not a per-day basis. While it's not that significant a contribution, it is still commendable. Regarding the drive-by donation posts set up for the Lebanese Red Cross, for example, do you write a check for their entire budget for a given fiscal year ? Didn't think so.

It's the collective effort of many countries that will guarantee a positive outcome for refugees. The taking care of refugees has always been a joint effort made possible by the cooperation and contribution of many countries and individuals. For example, Australia promised to donate around $11.5 million for refugee relief a couple of days ago. Should we respond to their generosity with sarcasm and ungratefulness as well ? The answer is a qualified NO.

@ Endless and Mimyl452, you guys forgot what will be going in Lebanese governors' pockets - so both calculations are wrong :)

shoo-yaba you are right lol i should have deducted that from my calculations!

endless, thank you i love being dense! and let me tell you something my "humanitarian" friends, if Russian wasn't just payed $900 million for the purchase of S-300s by Syria maybe i wouldn't criticize it so much but they did(while Australia didn't)! so yeah it's a joke donating for the refugees 10 million next to the 900 million but maybe that's me being dense!

With all due respect endless, Kuwait has donated $300 million. The insulting point of this event is that Russia is the main supporter of Assad and has been pushing for "normalization" when the status quo has no implication for the Syrian people. Do you think Russia will donate any more money when Assad is back in power? I don't know how familiar you are with khalijes, I am not from there, but I have worked for many.

Many of them are politically naive and ignorant, but its surprising how many of them are willing to donate(and granted, they have lots to spare) to random causes that don't really affect them.

Point is, Russia lacks any sensitivity, and this amount is a cheap gesture for political gain. They should be criticized for being scumbags at the very least.

A whole 10 million? Wow, worth one weapons shipment to the government that forced the refugees out in the first place. Thank you Russia!