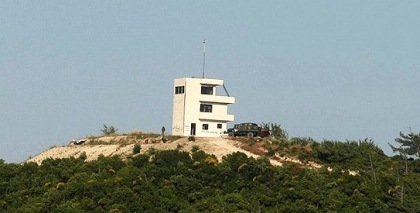 More than 12 shells landed on Saturday on a border town in the northern Akkar district without causing any casualties, the state-run National News Agency reported.

NNA said the shelling on al-Dbabiyeh from the Syrian side of the border caused panic among the residents.

They urged the Lebanese army to help the occupants of two houses to evacuate after three of the shells landed near the homes of Mohammed and Walid Kouha.

The shelling on Lebanese territories was the result of heavy clashes on the other side of the border between Syrian government troops and the rebels in the town of Tall Kalakh.

And we should be shocked or upset about this?

The population of these so called lebanese region were happy to see the free lebanese region being bombarded by the syrian army in the 80's.
Why would we care now? They were never lebanese but always influenced by the idea of the great sunni syria, before they were with Hafez el Assad army and now they are even siding themselves with al Nosra.

Let them all root, now they are implicating themselves in a battle that are not our.

The shia have not rapped & killed enough sunnis yet in syria, they want more kaafir sunni blood, new sea of untapped sunnis for the shias to kill so they can enter heaven

The army said it would retaliate. Where's the retaliation?

I have one big dream... It's to repeat with Nasrallah what Russia did to the «faux Dimitri». Google it, you'll be amazed.

You mean your dream is to see the army doing something to protect the integrity of the territory of the Republic of Lebanon.
It seems that you are going to have to dream on.

Non non, my dream is to do this with Nasrallah towards Iran

The army will evetually defend us, I have no worries. They just need more support from the people so they get the courage to fire at Syria, Israel or the enemy from within : hezb ebola.

All shelling or missile attacks on Lebanese territory from Syria must be fully condemned and the Lebanese army must control the northern eastern border with Syria. The Lebanese military cannot fully close the entire length of the Syrian border.... However the attacks on Lebanese villages from Syria should be recieved as an act of war on all of lebanon if the responsible party does not immediately apologies! Enough of those fsa leaders that have openly declared they would attack Lebanese targets! Apologize or declare war on all of Lebanon!

Nosrallah declared war on FSA. Wy would FSA declare war on Lebanon? Their target are the Lebanese shabi7a. Think about it, tonto.

so, what does the syrian deputy foreign minister mansour have to say on this matter?

I bet you our great good-for-nothing corrupt president-by-parachute, may God bless him, must be plucking his own hair now. Welcome to the March 14 club of miscalculators!