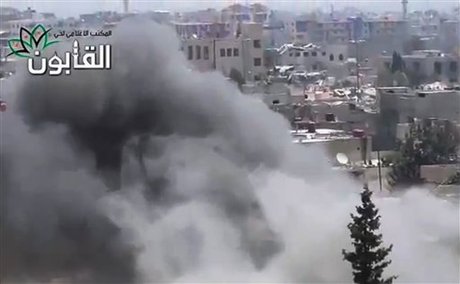 In northern Syria, rebels said they had begun a new assault on regime-held neighborhoods of the country's second city, Aleppo.

"The district of Qaboon in (northeastern) Damascus is being intensely shelled by regime forces," the Syrian Observatory for Human Rights reported.

Rebels were resisting the onslaught, battling troops loyal to President Bashar Assad on the edges of Qaboon as the army tried to storm the neighborhood, it said.

Nearby, clashes raged between rebels, troops and pro-Assad militiamen in the Barzeh neighborhood of the capital, said the watchdog.

The fighting erupted as rebels fought off an army attempt to enter the district, said the Syrian Revolution General Commission, a network of activists on the ground.

Battles also raged on the edges of Al-Hajar al-Aswad in southern Damascus and Jubar in the east, said the Observatory. Troops meanwhile pounded the Qadam district, parts of which are rebel-held.

Over the past fortnight, the army has dramatically boosted efforts to crush the anti-Assad insurgency in and around Damascus.

Meanwhile in Aleppo, large swathes of which are under rebel control, the main rebel Free Syrian Army (FSA) command announced the launch of "a battle to liberate several western districts".

According to a statement posted online, "several revolutionary brigades and armed factions launched a new battle at dawn today".

Activists said fierce fighting raged in the regime-held New Aleppo district in the west of the city.

Ever since, despite many clashes and army bids to retake control, the city has fallen into a stalemate.

The latest assault is being staged by 13 rebel groups, including the powerful Liwa al-Tawhid and the Farouq Brigades, the FSA statement said.

Saturday's fighting was heaviest in the Rashidin area of New Aleppo, an activist in the city told Agence France Presse via the Internet.

"A fire broke out in a (military) research center in New Aleppo after the revolutionary brigades used mortars to shell it," said the activist who identified himself as Mohammad, adding that the rebels were advancing on Rashidin.

The rebels "are focusing on hitting military targets" including a military security branch in the area, he said.

Mohammad said Aleppo's western districts are key because the army has been shelling rebel areas from there.

Saturday's developments come as the military pushed on with its bid to end the insurgency in and around Homs in central Syria, said the Observatory.

While troops shelled rebel-held besieged districts in the heart of Homs city, Assad loyalists also tried to storm the town of Tal Kalakh near the border with Lebanon.

Saturday's violence comes a day after at least 100 people were killed nationwide, the Observatory added.