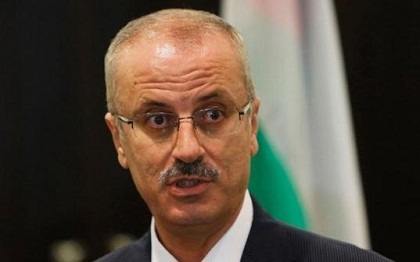 The news was first broken to AFP by a senior source, but was quickly confirmed by Abbas's spokesman Nabil Abu Rudeina in a statement published by the official WAFA news agency.

"The president of the State of Palestine Mahmud Abbas today accepted the resignation of prime minister Rami Hamdallah and asked him to continue on in a caretaker role until the formation of a new government," he said.

The decision was taken at a meeting between the two men in Ramallah on Sunday morning, their third such meeting in 48 hours.

"President Abbas has accepted the resignation of Hamdallah after he refused to work with two deputies," the source told AFP, speaking on condition of anonymity.

"He asked him to stay on in a caretaker role until he chooses someone else to form a new government."

The crisis erupted on Thursday when Hamdallah unexpectedly tendered his resignation over what government officials said was a "power struggle" resulting from Abbas's decision to install two deputies working directly under him.

Hamdallah had withdrawn his resignation on Friday during what a high ranking government official said was a "positive" two-hour meeting with Abbas.

They met for another 90 minute on Saturday evening, although officials were tight lipped about what conspired.

But by Sunday morning, the situation was beyond repair with Abbas taking the decision to accept Hamdallah's resignation.

"Hamdallah initially agreed to withdraw his resignation (on Friday) but he insisted yesterday during a meeting with the president on either not having any deputies, or having deputies with restricted powers," the source said.

"This led to a sharpening of the dispute over the powers of the prime minister, which ended up with the president accepting his resignation."

At the heart of the crisis is a dispute over the division of responsibilities within government.

Hamdallah, who was named to the post of premier by Abbas on June 2 and sworn at the helm of a new government four days later, had been incensed by the president's decision to name two deputies to work under him, sources in his office said.

During his talks with Abbas on Friday, Hamdallah had made clear he wanted "clear and defined powers as prime minister and for his deputies, based on the law, so his authority is not encroached on," an official said.

Another official said the premier had been "upset over his treatment by his two deputies Ziad Abu Amr and Mohammed Mustafa, and their attempts to gain powers not assigned to them."

Mustafa, who heads the Palestine Investment Fund and was himself considered as a candidate for the top job after the resignation of former premier Salam Fayyad in April, was handed the role of economic adviser.

"Mustafa was authorized by Abbas to sign all economic agreements, particularly those with the World Bank, without the consent of Hamdallah," he said.

But Hamdallah had objected, saying such powers should be held by the premier alone.

Fayyad's resignation in April was also triggered by an internal power struggle with Abbas which came to a head after the finance minister resigned.

Abbas is looking for a figurehead and should make that clear to future candidates.