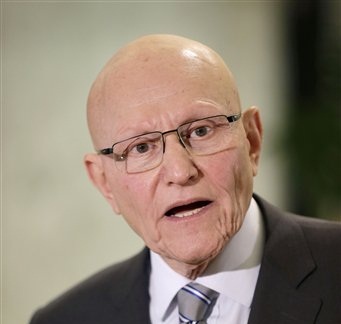 Prime Minister designate Tamma Salam called on Sunday for drawing an end to the "premeditated clashes" in the southern city Sidon.

“We call for supporting the army and the security forces in their bid to put an end to Sidon’s clashes,” Salam said in a released statement.

He stressed: “Perpetrators must be arrested and armed appearances should be terminated because they are threatening the lives of the residents and the civil peace in the city.”

Meanwhile, Miqati condemned the attacks against the army, the "security valve of Lebanon and the Lebanese people."

"We call on the people to embrace the army and support its mission in safeguarding security and stability," Miqati said in a released statement.

He added: "We also warn against getting dragged into attempts to blow up the situation in Lebanon."

"We urge wisdom, patience and avoiding emotional reactions to what is taking place which do not serve this critical situation."

Ten army troops were martyred and 35 others were wounded Sunday in a clash with supporters of Salafist cleric Sheikh Ahmed al-Asir in the Sidon suburb of Abra, the Army Command said in a statement.

The Giraff of Damascus gave our esteemed president the green light to annihilate Hizballa's natural enemy.

Jajajaja antibiotic. I'm not worth quoting. But thanks for agreeing with my statement.