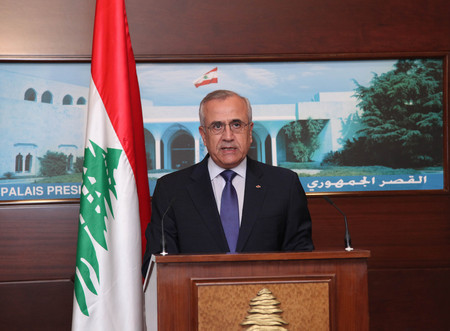 President Michel Suleiman assured on Sunday that the army is “fully authorized” to strike the attackers in the latest clashes between the gunmen of Salafist cleric Sheikh Ahmed al-Asir and the army’s forces in the southern city of Sidon.

“The military institution is granted the full authorization to hit the attackers and arrest the perpetrators and the instigators and bring them to justice,” Suleiman said on Twitter.

He explained: “This is in order to preserve the security of the Lebanese and the dignity and image of the army.”

In a released statement, the president also slammed calls for troops to defect from their units.

“Joining jihad against the army only serves the interests of Lebanon's enemies, he stated.

“These calls will not be heeded by Lebanese and Palestinian citizens or army troops.”

Suleiman called for a security meeting to be held on Monday in Baabda Palace.

He had discussed the situation in Sidon in phone conversations with caretaker Interior Minister Marwan Charbel and Army chief General Jean Qahwaji.

Ten army troops were martyred and 35 others were wounded Sunday in a clash with supporters of al-Asir in the Sidon suburb of Abra, the Army Command said in a statement.

May God protect you Sleiman. You are the best leader lebanon currently has.

starting with you antibiotic

get your mind checked for tumors!

The Giraff of Damascus gave our esteemed president the green light to annihilate Hizballa's natural enemy.

Sure he should be judged, like Samaha... after Syria's fate is known.
Im being sarcastic. we want justice, and Asir & clones are popping out like pop corn due to the ongoing injustice in Lebanon. It can be called a resistance.

This is one of the final calls before a probable civil war... either Hizballa surrenders its weapons and gets judged for the crimes it committed and keeps committing in lebanon and abroad or chaos will prevail. It's obvious, isn't it?

Sure hizbullah has weakened the Lebanese sovereignty and national institutions. The army cannot do much about it as hizbullah enjoys wide support among m8 Christians and Chiite a alike. Any attack on hizbullah would lead tosh rife. However Asir is a head of a criminal gang and enjoy little political support. The army should stop him once and for all to get rid of threats destabilizing the country.

absolutely greatpierro. Also fighting Assir will give experience in street fighting to the army commandos, it will give confidence in the army, morale and cohesion.

Prime suspect
the oeder should be shoot first
ask questions later
even in a mosque
that's the way to treat animals like assir, who hide behind religoues clothing

Asir should be immediately put in jail accused of destabilizing the country with organized armed gangs.

We are witnessing the complete disintegration of what has remained of the State of Lebanon right in front of us.... We are living in "civil" war chaos.

Before everyone attack me as a jihadist sympathizer please read carefully.

Al-Assir (whom by all means him and his cronies should face the full brunt of the law) is not the disease but is the SYMPTOM for the disease. It's like diagnosing someone with HIV with the flu and treating the flu. The flu virus may exist but the only reason your body is not controlling the flu is because of the existence of the main problem the HIV virus. HIV left your body susceptible to other infections and that's the same thing here. We have an auto-immune disease.

The minute you get rid of Assir you will have others spawn in his place that's a FACT until you either (A) Erradicate all Sunni's (B) Get rid of the main problem which is Hizbullah's weapons and hegemony over the state and their control over Sunni rights.

true. But TODAY, we CANNOT get rid of HA's weapons. It can only happen from outside. When HA weakens we can talk to them. Now it is too arrogant because it is strong, and the symptom u are talking about is not helping.

That's the Lebanese way patch it up and ignore it until it's a problem again... no wonder you still don't have 24/7 electricity...

Well, it seems the event was ignited by the Army's arrest of two men from Asir's mosque. Do you think such lunacy would simply vanish if HA didn't exist ? Not even convinced of that in the slightest. The embodiment of their religion (e.g. salafi/wahabi/takfiri/etc.)is simply incompatible with our way of life. To them, our way of life is alien -- far too alien to live with indefinitely.

I lived in Lebanon for 25 years and MOST of my friends were Sunni's (some can be considered very strict sunnis) and I have not seen or heard a single one of them advocate for Salahi Wahabi or any of this crap. Show me one Sunni politician that claimed that, on the other hand you have Nasrallah and his cronnies who said in the open that they want "Wilayat Al Faqih" the shia version of Salahi.

It's not in the benefit of Saudi Arabia or any other GCC country to turn Lebanon to a religious fanatic country like Saudi Arabia, they love the idea that they can shed off their burka and be or do whatever they want in Lebanon. I remember the days when we used to hang out at Dunes and watch how women go to the bathroom in full veil and come out all dressed up.... the good ole days..

Hate what I say all you like and hate the Sunni's all you like, but you have to understand you can not marginalize an entire group of people without repercussions. Their moderate leaders were assassinated (i.e. Harriri) they have people like Miqati being forced on them, their brothers in Syria are being slaughtered... people can take so much...

This is exactly what Hizbullah is trying to make you think, when was the last time a bar or a night club or ANYTHING got closed in Beirut by Sunnis?... NEVER when was the last time you had Hizbullah close out bars or liquor stores? Google and you'll find out many last year... Most of the Sunni's in Lebanon (except in Tripoli) are moderates, but the moderate voice is being weakened by the continuous non-stop violation of their rights.

And radical shias want us to be Iran's puppet. Its a lose-lose situation. Christian groups wouldn't be the only ones who would suffer if dogs like Assir came into power. Other religious sects will suffer too, as well as any foreigners and moderate or non-religious Shias and Sunnis. They would turn Lebanon into a repressive shithole like Afghanistan under the Taliban. Why cant we just get rid of both of those radicals? Any traitor deserves a death sentence.

FlameThrower, I used to go to bars INside Tripoli when I was in Lebanon. Hamra is a sunni district and I spent my 20's there not ONCE have I seen a Sunni jihadist come over and try to close the store. Lebanese Sunnis majority have always been about co-existence, yes ofcourse their are the radicals like in any religion but for the longest times they were shunned, the radicals in Nahr el Bared where immediately shunned by EVERYONE and all of the Sunni's gathered behind the army and supported the army.

The Irani Ayatollah started this whole "Takfiri" thing and pressed Nasrallah to start using this rhetoric and that's exactly what we are seeing increasing attacks against the sunni community expecting some outbursts than taking advantage of these outbursts, personally I think this is a devious plan, but you will note one thing you will NOT see a Sunni uprising and an outpour that's not going to happen what you will see is further marginalizing of Sunnis.

Look at our recent past there were several Christian militias several Shia militias and there was the Murabitoun which was eventually controlled by Syria and they were probably the "weakest" of all militias.

I think I get what you're trying to attest but a caliphate in the 21st century is I think very unlikely.

people...army... resistance. its not working.

Former lebanon, unfortunately you are correct in your analogy, the real cancer is that Harriri women who she will never side with the army, have you seen the majority of who died in this fire fight. Yes they are Christian soldier protecting your fucking freedom from people like al Asia and his money honey who live couple blocks up the road she is the cancer

Notice how its only the Sunni and Shites who cause these problems? I've had enough of their filth. Either they surrender themselves to Lebanon and finally act like human beings, or they get deported to Iran and Saudi Arabia. We need to clean Lebanon up.

mr. slyman go back to sleep

Anything less than killing those holed up in that so called mosque in abra is unacceptable.

Lebanese politics are fully dependent on Syria, see we have anti-Assad group and the pro-Assad group, but NO PRO-LEBANON GROUP NO PRO-LEBANON THERE'S NO PRO-LEBANON IN LEBANESE POLITICS! Bunch of idiots all of u! Lebanon is not ur country, it's my country , not yours, you are all destroying it, 7esso ba2a 3a damkoun.... for people who are finishing school, good luck with your life, leave the country, coz there's no hope if u continue to act worse than animals, or be forsaken!

Strong words are a must and I hope u got my msg and act for the salvation of your country which u are trying to burn in front of me!

How do you want to hang Nasrallah? From his beard?

This is expected when you have armed gangs everywhere. The first mistake was to allow arms outside the state authority. I do not want to hear that certain arms are noble and divine and others are not. You carry weapons you belong to jail with your leader for undermining the state authority.

expect an battalion of red thumbs for speaking wat 80% of lebanese believe.

@wolf-: let's say he is Palestinian, guess what? Hizbollah already killed an innocent citizen as part of hitting many others as of two weeks ago in front of the Iranian Embassy. The solution has always been on the table: No weapons except with the Army.
God Bless Our President.

As part of HA inner circle, we have officially declared war against the " Sunni Fanatics " that have attacked our LAF

@fares_ to refer to Sulieman as "best leader lebanon currently has" is to shower the President with faint praise. Among the current crop of "leaders" in Lebanon, street cleaners look pretty good.