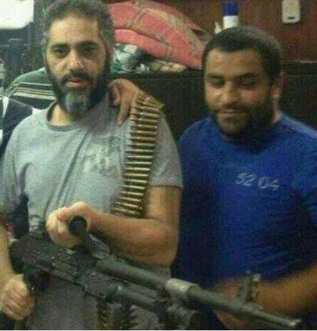 The brother of former singer Fadel Shaker was killed on Monday during the clashes between the army and the gunmen of Salafist cleric Sheikh Ahmed al-Asir in Abra neighborhood of the southern city of Sidon.

“Abu Abed Shmandour was killed in Monday’s clashes with the army in Abra,” the state-run National News Agency reported.

“Six gunmen were also arrested during the army’s raids, among them is Abu Abed Shmandour’s son, who was disguised as veiled woman.”

Meanwhile, MTV said that Fadel Shaker fled the Bilal bin Rabah mosque through its backdoor and headed to the Ain el-Helweh camp.

Radio Voice of Lebanon (93.3) said both men managed to flee the mosque with the help of armed groups around 4:00 p.m.

LBCI television also revealed that the army seized control of the houses and offices that were occupied by Asir's group, confiscating quantities of arms, equipment, uniforms and al-Nusra Front flags.

Sidon’s clashes between the army and supporters of Salafist cleric Sheikh Ahmed al-Asir have resulted in the death of at least 16 troops.

The southern city’s clashes are one of the most intense bouts of violence in Lebanon linked to the conflict in Syria.

I'm not sad about it. Anyone is?

But what tells us that someone for the hezb didn't put the flag there... You know, some kind of double agent.

Well, that's FTs theory about Hariri, Gemayel, Tueni, Kassir, Chidiac, Hamade and the other martyrs. I'm giving them a taste of their own medicine. And beleive me, it's sour!

whatever, good riddance.
all extremists whether they are sunni, shia or even Christian are nuisance to the existence of Lebanon and should not exist.

now the government should take steps to take possession of all of the possessions of the shakers and try to make amends to the people in the area that lost their homes.

Wish they would all die!

Just another log for the fires of hell, hopefully his brother isn’t far behind him. Ahhhhhh ya Flamer, the MAG is every man’s mistress!!

By the way Fadel is not Lebanese, Fadel Palestinian and everybody knows that

That isen't correct. Fadel shaker is lebanese from the shamandour family who are an old sidonian family. His family lived in the ain el helweh palestinian refugee camp for some time when he was growing up because of poverty but they are lebanese 100%. Many lebanese live in the refugee camps due to poverty. Besides, if we considered him to be lebanese when he was a singer then we better consider him to be lebanese when he became like this, otherwise we would be hypocrites lol.

I promise u fadlo on behalf of Lebanon, u will be hanged for killing 2 lebanese soldiers, u wont go unpunished!

Great news ,it is a shame his brother wasn't killed.

I just wish it didn't have to be for this disgusting thing that happened!

for once guys your are all funny and nice together plz keep the trend when it comes to hezbollah. For the now one terrorist list scraped. Still a lot to do, hope this time the army will become decisive in becoming the exclusive firepower on the lebanese soil