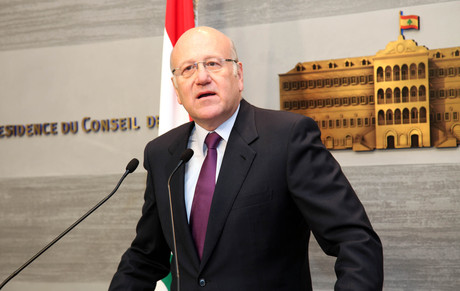 Caretaker Prime Minister Najib Miqati, Premier-designate Tammam Salam and the former prime ministers on Monday condemned "any attack on the army, whichever side it may come from," while demanding the closure of "all security zones."

In a statement issued after a meeting at the Grand Serail, the conferees "stressed their condemnation and rejection of any attack on the army or any security institution, whichever side it may come from, because the army is the shield of the country in the face of disintegration and the undermining of Lebanon's image and independence.”

And as they stressed their commitment to "the state and its institutions, topped by the military and security institutions," they called for "putting an end to futile attempts to put the army in a confrontation with the Sunni sect, while they are the advocates of the state and law."

"We voice our solidarity with our people in all the regions who are feeling that the law is only being imposed on them, while it should be imposed on everyone because the state must be responsible for everyone without selectivity," said the statement which was recited by Miqati.

The conferees called on the army to "shoulder its responsibilities in a full manner," urging the Sunni community to "pay attention to the trap that is being set for them and for the army with the aim of stirring discord between them and the army."

They also called for “implementing a security plan that prevents armed activities in a comprehensive manner and targets all security zones and security apartments.”

The prime ministers stressed the importance of “arresting those who attacked the army and holding them accountable” after conducting an “instant probe.”

And as they warned against being dragged into “the trap of sedition and divisions,” the conferees underlined the importance of “clinging on to coexistence and preserving civil peace.”

They also emphasized the importance of dissociation from the Syrian crisis and of abiding by the Baabda Declaration in order to protect the Lebanese from “regional conflicts.”

The prime ministers called for forming a new cabinet as soon as possible “so that it can shoulder its responsibilities amid these difficult circumstances.”

Sixteen troops were killed and more than 50 wounded in clashes between the army and gunmen loyal to Islamist cleric Sheikh Ahmed al-Asir on Sunday and Monday.

A source close to Asir said at least five of his supporters had also been killed.

On Monday afternoon, the army stormed Asir's security zone in the Sidon suburb of Abra and arrested a number of gunmen as the Islamist cleric fled to an unknown destination.

Abra's clashes erupted when al-Asir's supporters surrounded an army checkpoint in the area, where a vehicle transporting other supporters of the cleric had been stopped.

After the armed men attacked the troops with gunfire, the army fired back.

Abra is home to a mosque where Asir used to lead the main weekly prayers on Fridays. The sheikh had claimed that Hizbullah uses apartments in Abra to keep him under surveillance.

He also said the Lebanese army has provided cover to Hizbullah, whose members are fighting alongside Syrian President Bashar Assad's troops against rebels.

They also called for “implementing a security plan that prevents armed activities in a comprehensive manner and targets all security zones and security apartments.”

Yes, the army should prevail and the removal, if they exist or proved false, of armed men and weapons from those apartments should immediately follow if we are to avert an explosion. Fair is fair, since the army will take out Assir and his men, it should take out the HA apartments as well.

I agree lebnanfirst --- However we must also agree that we need to fund a strong army. We cannot have a strong army on a shoestring budget.

Now that the area has be cleanses, Hezbollah will colonize it. They started it with the fake apartments.

FYI, Abra is Christian and Sunni (only). It's about to become Shia.

they should take out hizbushaitan as a whole, not just the apartments.

Do you have proof? My little finger tells me the army arrested Assirs brother in law and bodyguard first... Then, it's obvious Hezbollah was behind it.

The al-nusra flags and guns and ammo obviously mean precisely nothing of these people's characters and virtues, and they are in fact the good guys that were wrongly detained on Hizbullah's orders.

May the day come when Shia terrorists (Hezb) are targeted and eradicated as well.

God the bless the army .I love it how Asir is gone now ,filthy scum.