Bahia Hariri: We Don't Want the Resistance Brigades in Sidon 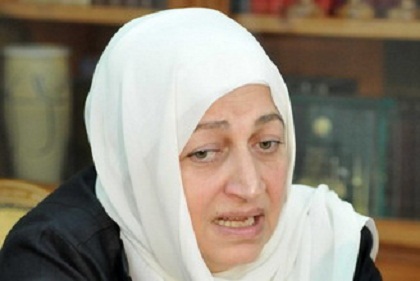 Sidon MP Bahia Hariri on Tuesday said the southern port city rejects “the presence of the Resistance Brigades” -- a group affiliated with Hizbullah.

"We do not want the presence of the Resistance Brigades in Sidon, period,” Hariri stressed in various interviews reported by the state-run National News Agency.

She explained: “We are not against anyone and Hizbullah's weapons are debatable on the national level, but the Resistance Brigades has no place in the city.”

"We all resist Israel but we will not allow demarcation lines between the people.”

The al-Mustaqbal MP said Sidon is open to people of all religious factions: “The city welcomes Sunnis, Shiites, Christians, Palestinians and Syrians. This is the view of the people I represent and I know it is the opinion of everyone who has affections towards Sidon.”

Hariri described the latest clashes in the city as a “dangerous thing.”

"If we do not know how to deal with people, things will go back to being scattered,” she warned.

“We quickly want a security plan that reassures people. We want the army to be at a single distance from everyone.”

Hariri continued: “We want to be protected by the state and the army to take control of our security. We do not want any other kind of security.”

"I will strive to make this happen this through my official post.”

At least 16 soldiers were killed and 50 were wounded in the clashes with the armed supporters of Salafist cleric Sheikh Ahmed al-Asir in Sidon in the past two days.

More than 20 of al-Asir's supporters were killed, according to a security official.

Dozens of them were also arrested, but there was no sign of the cleric.

Absolutely right benzona! Weren't we all sold on the fact that HA's role was a 'resistance' against Israel? So get the hell off the street and let the army do their job! No one asked for your help nor do we recognize you lying scum Persian scums!

Yes, exactly. 3 squads of hezb is were shooting at Assir's mosque along side the army.

THE WORLD IS WATHING!

the day you involve the 500.000 palestinians of lebanon, is the day lebanon is lost forever. so will be the Lebanese Chabiha.

This woman is very dignified and rational. As a matter of fact, all harrrir clan are dignified and loyal to Lebanon. i am not a Sunni (Christian) and have respect for anyone who puts Lebanon first. harriri family is one of the best in terms of putting Lebanon first. I am very disappointed from Aoun. he's lost his mind.

hrm...she's not right about the brigades.. they need to be CONVERTED into army trained people. Keep converting until everyone is part of the army. Job done. idiots.From a foreigner.

Either way , in the bigger picture he is an enemy of Hezbollah and if left alone would grow versus time, anyone who believe the army is not infiltrated should have their head examined. Lebanese are funny, this army is from Lebanon not Mars and suffers the same illnesses lol, the army disintegrated in the 70s and couple more incidents like these and it will break apart into sects. The army did the dirty work of Hezbollah in Sidon, the rest is details

HA probably told the Army either deal with him or we will take over, so they were pretty much black mailed to do their dirty work. Either way, they did the dirty work, and I do agree that Assir is an idiot

wolf, the only idiot is you.. Tell your Farsi militia and their supporters that they need to start paying for electricity... We are tired keep picking up the bill...

Maybe they are tired of your cannibal story..

zahle_nights, according to the Iranian cheerleaders the rebels fighting Assad are Zombies and eat human flesh at every meal... so obviously the Great Protector Nasrallah from the safety and comfort of his underground bunker, is sending his Saintly thugs to save the Lebanese before they are consumed.

general_puppet.
according to your avatar ! whoever exercise that hard will live about 100 years minimum. boy you are going to hate your life.

lebpatriot. don't worry about the chopper. he is confused here,he said your avatar is western,and your mind is hizb.how could that be? give him a 40 more years he will get it right.

She's 100% Lebanese. Can't say the same about Nasrallah of Najaf.

I may have 3 citizenships but I was born in Beirut as well. you can tell this to your Chabiha friends controlling the Rafic Hariri International Airport so they can silence me next time I land there!!!!

Last time I checked which was a few months ago, it was called Rafic Hariri International Airport. There are loud speakers in arabic and english confirming this when you head towards the archaic customs.

I may have a few jews left in my family, they never stepped in Israel and never were interested on doing it. your denigration is meaningless.

Look who's speaking a FARSI who isn't even Lebanese making such comments! Go back to Tehran BSThrower!

Because you talk out of your rear!

bigsami. was that you ? damn it stinks.

Soldiers are victims of dirty politics and thanks for the civilized insults. nothing happens by coincidence and to each his/her opinion. Have a good day

Now that Thelma and Louise are on the run from the law after years of investment from the Harriri family they are on tv every five minutes trying to blame HA for their failures. Dont worry once Thelma assir and Louise chakker are caught we will know who was financing them.

i did not know that Palestinians and Syrians are a religion

sadly, I hear the same here about 'turkish religion' or 'moroccan religion'....

most of the people have little culture. it isn't their fault, it's the will the governments. enlightened people are a threat.

benzona,you pederas what is hard to understand? you spend all your time here flopping your gumms without bothering to research !according to the prophet muhammad A.S he said this, at the end of times there will be 73 sects of islam.but only one will see heaven.the jews are the chosen people according to them,according to the salafi wahhabi doctrine they are the chosen one ,the same idiology,diffrent color.real chrstians and real moslems believe in the return of jesus and almahdi to the city of damascus and they will appear togther inside the saint john the babtist church,known as algame3 al umaoui .damascus will not fall,jerusalem will.

We don't want Sannis in Lebanon. Pack you filthy bags and go back to where you came from, chebh al jazira, where Sanni congregates.

we don,t want you mam in lebanon,bleeeeeeeeeeeeeeeze start packing.we want to live in peace.

We also do not want citizens undermining the state authority by not paying for Electricity while others pay as well as tax for their property, we do not want canister gas tanks every few months to explode because two citizens are fighting over stealing the state properties such as building illegally on the airport road. Those who beat the state money collectors and local security are in the same boat as 3assir since the rules apply on ALL.

Your avatar is so Western, your mind is so Al-Manar.

lebpatriot. ask mr nawfal daou, he is the owner.they did this to me for 9 years i have all the records.it is nice to live in a world where no body can hide anymore. lol

so why assir atacked the army and not the hizb !?

Bahiya is disgusting. the world knows she's behind all these salafists. how in the world didnt the army arrest her and her filthy supporters yet. God bless Oussama Saad the real Sidonist, how many years do we have to wait until order is restored and moderate Sunnis come back to play their usual role. Army heros just get rid of all Salafists Please!

I am absolutely disgusted with the lot of you. Instead of trying to get together to establish a free, democratic and independent Republic of Lebanon, you are all at each others throats. One of these days unfortunately the pot is going to boil over and the previous Civil War is going to look like a childs game.
Wake up Lebanon before it is too late.

You are right, I am in the UK, and see from the outside what is going on and it sickens me.