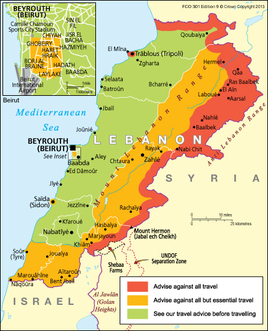 The British Foreign Ministry issued on Thursday a travel advice, warning its nationals from heading to several areas in the country that witnessed unrest, and saying the situation could deteriorate 'quickly.”

The areas include the northern city of Tripoli, the southern city of Sidon, the eastern town of Arsal, Palestinian refugee camps across the country, Hermel, Baalbek, south of Litani river and Beirut's southern suburbs.

“Following the assassination of the chief of the Intelligence Bureau of the Internal Security Forces, Brigadier General Wissam al-Hasan, in October 2012, violent clashes took place,” the notification issued by the British government said.

The statement warned that further violence could take place “which could restrict departure options.”

It said that the British government “could have limited abilities to provide assistance with departures.”

“There is a high threat from terrorism,” the statement said.

The foreign ministry expressed concern that the “security situation could deteriorate quickly.”

The statement could be found on the following link: https://www.gov.uk/foreign-travel-advice/lebanon.

The U.S. Department of State reiterated on Tuesday the travel warning advisory to Lebanon over safety and security concerns.

Tensions between Sunnis and Shiites have increased significantly because of the Syrian civil war.

Shiite back the regime of President Bashar Assad and Sunnis support the Sunni-led uprising.

Lebanon thrives on the tourism industry here, there's no other place like it on Earth. Politics and religous bickering aside, this country is epic.

I ain't not going to Lebanon this summer... Nor is anyone from my family worldwide.

I've been here for 2 months. Residing in Beirut while doing some International Banking at Byblos... There's really nothing to worry about. Gov'ts are just trying to cover all the bases. To those who are not coming, I'll be drinking to you!

Last thing Lebanese need are POMS in Beirut. Keep the attitudes and unwanted pretentious monarchists on your island please. Yours kindly, the Lebanese People.

Last thing Lebanese need are a-hole d-bags like you ChrisJ to further sully the Lebanese reputation for tolerance and hospitality. Keep your colonial-era stereotyping and z2a2é mentality back in Iran or Saudi Arabia, or whatever other sh-hole that has vomited you forth into our midst. Yours scornfully, the Real Lebanese People

they are right to issue travel warnings: civil war is at the door.

Allah yse3dak ya geha you are so negative...

typical m8 thug.
to m8 thugs: if ever you think getting rid of asir demoralizes us, then think again.
we are glad you took him out, but we are here to stay and take you out when we want.

typical m8 thug.
to m8 thugs: if ever you think getting rid of asir demoralizes us, then think again.
we are glad you took him out, but we are here to stay and take you out when we want.

For those who read the article, the UK has most of lebanon in green meaning you can go there, but be careful, which is the same as jordan or turkey.
They are seeing shades of grey. And this is appreciable.
Unlike the US who has had travel warnings since 1982
and the GCC who use travel warnings as political tools.

If any person come to USA and live 2 weeks to test democracy, human respect, and equality... I promise, you will never want to leave USA.

Hey Ray(guest) I lived and worked for 3 years in the USA. loved it. Then chose to return to lebanon. Democracy, human respect and equality are nice. But Lebanon... gheir chi... If you dont feel it, you wont understand it.

As for the USA take the middle east... yareit they colonize it and treat us fairly, not like some colony to suck or to please israel.