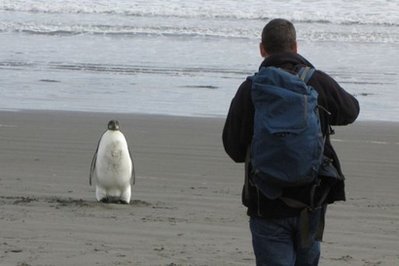 Wildlife experts said they were astonished Wednesday at the appearance of an Emperor penguin in New Zealand, some 3,000 kilometers (1,900 miles) from his Antarctic home.

The penguin, a juvenile male, arrived at a beach on the Kapiti Coast, 40 kilometers north of the capital Wellington on Monday afternoon, the Department of Conservation (DOC) said.

It was only the second recorded sighting of an Emperor penguin in New Zealand, DOC spokesman Peter Simpson said, with the species' only previous registered appearance in the country on the South Island in 1967.

Simpson said he did not initially believe reports that the wayward bird was an Emperor penguin, the largest species of the distinctive waddling creatures, which can grow up to 1.15 meters (45 inches) tall.

"At first I thought it must have been some sort of seal but we went and checked it out and to our immense surprise it did indeed turn out to be an Emperor penguin," he told Agence France Presse

Simpson said the bird appeared to be in good health and was taking regular swims to cool down in the relative warmth of the New Zealand climate.

"At this time of year he should be sitting on the sea ice in Antarctica in 24-hour darkness," he said.

"They go out to sea to feed in the Antarctic summer and this one, he's a juvenile and it's his first time out, so it looks like he's gone a long way out and got lost."

Simpson said wildlife officers were monitoring the penguin and expected it would eventually depart for the long swim home.

"I expect it has some sort of homing instinct," he said.

"This is a species that spends its whole life at sea, either in the water or on the sea ice."

He said the penguin had proved an attraction for curious locals, who had been warned to give the giant bird a wide berth and keep dogs leashed around it.

Emperor penguins live in colonies ranging in size from a few hundred to more than 20,000 pairs, according to the Australian Antarctic Division.

With no nesting material available on the frozen tundra, they huddle together for warmth during the long Antarctic winter, as depicted in the Oscar-winning 2005 documentary "March of the Penguins".